By JEFF DAYTON-JOHNSON
September 18, 2007
Sign in to view read count 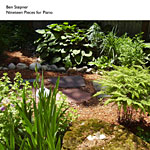 There's a corridor on the second floor of the Musée d'Orsay in Paris with a breathtaking succession of paintings by post-Impressionists like Bonnard, Vuillard and Denis. Less visited and less famous than the paintings by Monet, Cézanne, Renoir, van Gogh and others upstairs, they are nevertheless a highlight, perhaps the outstanding highlight of a visit to the museum.

Listening to pianist Ben Stepner's début, a short record of short solo piano pieces (average length: one-and-a-half minutes) is a bit like being pushed through that post-Impressionist corridor rather too quickly. That's meant in part as a compliment. Like the Bonnard and Vuillard paintings, Stepner's miniatures are immediately arresting, appealing, obviously well crafted and expertly executed. Many of these short compositions are truly memorable. "The Cosmic Lesson" and "After the Session" have a rollicking, hard Ben Folds-like groove, while many other tracks like "Poem" and "Opposites," wear their classical pedigree on their sleeve.

But if you're rushed, those pleasant sensations are accompanied by a nagging sense that there might be more to savor, if only there were more time. What might become of these fragments if they were allowed to develop for a couple more minutes? Would Stepner's compositional and improvisational imagination—impressive enough on the evidence of this record—be up to the task of longer performances? Probably, but it's all over so quickly.

Even glanced at in passing, however, some of these pieces leave a lasting impression—like a Pierre Bonnard painting. And then there's the question of influences. Some will hear echoes (intentional or otherwise) of Keith Jarrett in the clear and strident playing. In the unapologetically sentimental melodies, Paul Bley seems present in the compositions too.

Above all, there is the sound of Rachmaninoff: loud, discrete chords leaping confidently up and down the keyboard in somewhat Slavonic majesty. And Monk: Stepner's "College," for example, perhaps the best of many good tracks here, is a distorted take on Monk's "I Mean You," played percussively and athletically, leading into a dreamy and very un-Monk-like middle section. "Monk's Mood" can also be heard in the closing "Self Portrait" (like seeing Cézanne in Vuillard's paintings).

It's probably unfair to point out that Stepner is nineteen years old, but pretty interesting too. It's tempting to draw a parallel to Jarrett, again, who seemed to emerge fully formed at a tender age. Stepner is indeed young, but has been working hard on his sound for many years, and not in splendid isolation either: among other accomplishments, he opened for Danilo Pérez at Boston's Museum of Fine Arts when he was thirteen. This disc promises even greater attention and it's richly deserved.

Poem; The Cosmic Lesson; Insomniac; The Nature of Sound; Because I Love You; Shower; Universe Stopped; High School; Emulsions; Egotism vs. Altruism; Untitled (