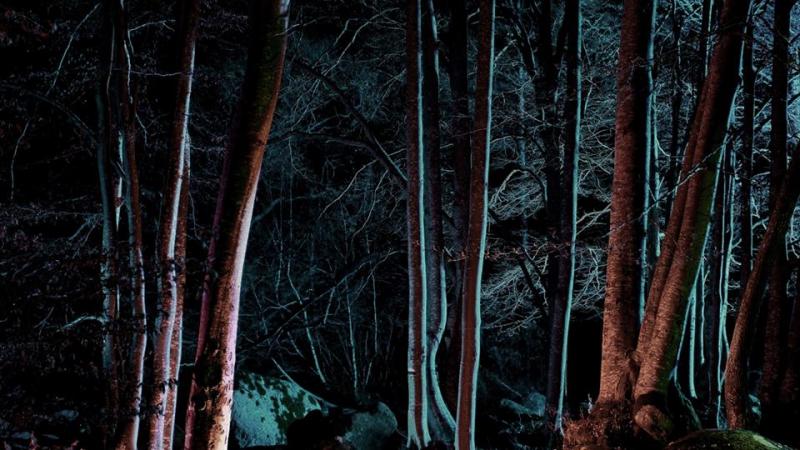 Nils Petter Molvær's ambient sound and light installation, Lucid Dream, was performed in Germany on the last night of May, 2014. The floating dreaminess of the music was enhanced by sound designer Jørgen Larsson and lighting/video artist Pekka Stokke. Molvær has elaborated the concept of the performance together with Beate Schüler, who was also the curator of the event. The performance, sounding the elusive territory of the consciousness, in close co-resonance with nature, has been conceived as a one-hour journey in five stations: "Gong"; "Bullfrog"; "Breathing"; "The Japanese"; and "The Clearing."

It is a coppery sundown on the outskirts of a residential park in western Germany. Along the path that deepens into the forest, a diffuse noise of brass and iron emanates imperceptibly from the blue tree branches joining the birdsong that announces the nightfall in a chirpy profusion. As we reach the Gong, a touch of cymbals, a rasp on the metallic verge, grow in resonance and become a bell-toll gradually incorporating all the sounds of nature and those of our steps that come to a halt. The branches float in silver green and hues of blue, as the powerful drone gradually recedes in concentric waves that mingle with the distant hoots of an ambulance siren.

Whips of cymbal descend from the darkening heights; deep tones emerge towards the lighted corollas, where the transparent branches float in a violet light mesh. The tree trunks become animated by projections and as the aurora borealis unfolds, accompanied by electronic distortions, the feeling of entering a world beyond reality reached completeness.

Acute percussion accents with deep bronze resonances and dry wooden claps open the passage to a new sensory world. The start of a cry, the scratch of iron upon iron, accompanies the darkening path among the red tree crowns. Upon leaving the tall hall of foliage, the ground—a rustle of dried leaves at first—turns into a mossy carpet, softer with each step, permissive, more liquid.

As we descend in the forest, following the transparent hues of violet and blue, we enter the realm of Bullfrog. A creek flows with its quiet murmurs along the path, as an insect hum coming from the trees gradually turns into a compact sound canvas that is permeated by the solitary trumpet calls. They grow and recede in ample voltas giving ground at intervals to an expectant vegetal silence, like the concentric traces left on the water by the touch of a branch.

The creek reflects the violet phantom-like trees contours, depth turns into heights, the forest floats. The sound comes back, intensified by the pulsing light and becomes a frog concert on a river flowing forth as the fleeting melodic line takes over. We move slower, we stand still. The birds are quiet, the lights start pulsing with primal resonances.

The sound intensifies until it becomes a powerful sonic pool, guarded by smothered fires hidden in the growth, to diminish then in scattered tides. While blue becomes mauve, the tree stems are embraced by the sliding arms of a light octopus that animates the vegetal patterns. The trumpet awakens the dormant sounds and transforms them into a harmony of counterpoints with a rhythmical pattering that returns to the original sonic matrix. The ground smells of moss and mire, the sound becomes nature. It is the moment in which one realizes the sheer beauty of an early summer night in the depth of a forest.

The passage is marked by pale hollows, like devotional gullets in which glimmer virtual candles. The path becomes a cathedral aisle flanked by gothic arches. Dull fires flicker in the dry leafage.

With "Breathing," the trumpet enters the dream in languid turns of a solemn ballad that is amplified and augmented then by sampling. A dream in red with growing lights and rising tones. My hand is propped against a tree stem on which long ago somebody had harrowed a cross; a cutting mark, a sign of faith or maybe a love wove.

The sound of the trumpet deepens into a velvety texture, grows then in intensity, like the mossy crest of a green hill, engulfing the thoughts of the listener and becoming forest and earth, and then sky. The sound grows and soars above the tree heads; in the bush a white flame is raising. The continuous vibration of sound mingles with the quiet rustle of the dormant wood. The birds are asleep.

In the palm of my hand I have the spidery prints of the stem, so I put my arm around it and feel its warm, rusty texture. From the depths created by a dream being born, the sounds of an eerie world arise with the solemnity of a hymn, the quietude of a prayer. The world is still; the sound becomes nature. When the dream fades away my arms are clasped tight around the warm comforting stem of a tree.

A spectral tunnel of cyan branches leads to "The Japanese."

Minute butterflies dance phosphorescently around the light sources accompanied by a tensioned sound halo. As a curtain of sound rises from blue labyrinth of branches, each light is enveloped in an aura of insects that move like scattered silvery petals carried by gentle gusts of air. The sounds reach the grave register in a primal drone that leads deep into the folds of consciousness.

The grave accents become dominant chords which pour into a polyphonic conglomerate that contain the original pulsation, the font of the dream. The sounds become clear and float in intricate modes towards the tree heads, followed by the rush on the cymbals and the airy breeze of wind chimes.

Deep chords return to the earth and rise with the wind like the breaths of a huge organ engulfing the sampled forest sounds in a grave mixture of electronic distortions that generate a state of trance. Along the way we are accompanied by the whistle of a flute, the cry of a bird. Rarefied frazzles of trumpet sound emerge from the dark like secret calls, isolated tone whiffs subside to the light that announces the last station of the surreal passage.

In "The Clearing," the light is concentrated on a point that contains the whole universe; it absorbs the viewer with the fascination of a new world, which recreates itself in other light-worlds—creating, at their turn, new universes. The rich orchestration recedes into a recurrent cacophony of instrumental voices, a song, a chirp, a buzz—a sound that contains the mystery of the woods, the secret of a summer dream. In a calm, diminishing stance, the dream returns gradually to reality on a large alley, leading to a white castle in a German forest at night, leaving behind the last dream of May.