Nikola Kodjabashia: The Most of Now & Explosion of a Memory

By NENAD GEORGIEVSKI
June 2, 2010
Sign in to view read count
Nikola Kodjabashia, who is a British-based, Macedonian-born pianist and composer, blends classical and electronic music, field recordings and samples. His is a body of work that shows a tremendous musical curiosity, and which ignores boundaries in favor of haunting and strangely familiar sounds.

Nikola Kodjabashia
The Most of Now
ReR Megacorp
2007

Kodjabashia's second album, The Most of Now, features a small core of musicians, mostly comprised of members of Project Zlust, as well as other special guests. Though most of this ensemble was featured on the previous record, Reveries of the Solitary Walker (ReR, 2004), which was calmer, mournful, intimat and melancholic, this one is a much more playful and upbeat record, a magic carpet ride that flies above and beyond the boundaries of world, classical and jazz.

While the first 10 pieces are rhythmic, melodic and at moments jazz influenced, the album borders evokes modern classical music more than anything else. There is a creative interplay between the musicians that results in beautiful, rewarding music which gradually reveals its subtleties. In general, Kodjabashia's music reveals a great fascination both for acoustic and electric sounds. There are tracks on this record that are full of the reflective melancholy that characterizes Kodjabashia's work on Reveries. As with the concept used on Reveries, there are themes that are repeated throughout and they simply pop-up unexpectedly in many variations. There are even echoes of the main theme from the aforementioned record.

As written about in the liner booklet, there is a full conceptual structure in place here that would make the album intimidating, if the music wasn't just as beautiful even without such ideas. As a whole The Most of Now manages to be varied sonically without losing the thread of narrative. It is an immersive and fascinating web of ideas and melodies. 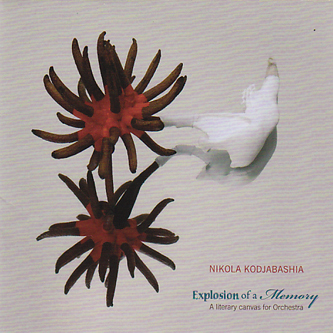 Kodjobashia's first two albums saw him experiment with translating cinematic techniques into sound through the form of musical narrative. They both used a small combo of highly mobile and versatile musicians. This time the pianist uses the services of the Macedonian Philharmonic Orchestra.

Kodjobashia describes this work as a literary canvas for an orchestra and it certainly sounds like a dramatic movie score with the instruments hauntingly recalling old and dying memories. Kodjabashia makes stately, slow-building music, which frequently combines electronic processing with classical orchestrations. It is a darkish, eerie work with a sense of uneasiness. The music is divided into four movements and it teems with dense orchestral figures and dynamic contrasts. Throughout, it explores the potential for interaction and tension between acoustic and electronic instrumentation. Somehow it sounds like a soundtrack for an imaginary film.

The Explosion of a Memory is a map of moods and a deliberately forward-thinking piece of work. It is a homage to the haunting power of memories and is thoughtful, subtly expressive music.

The Most of Now

Explosion of a Memory