By NENAD GEORGIEVSKI
March 13, 2011
Sign in to view read count 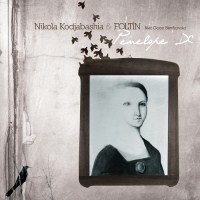 There is a motto which says that if you don't know to which port you are sailing then no wind will be favorable. It's the same with collaborations. Following Ovaa Transplantirana Mashina za Chukanje (Self Produced, 2008) the latest installment of the music of Foltin finds the band enjoying the company of good friends. For this journey, it has employed the services of Nikola Kodjabashia, producer, composer and electronic wizard, as well as Goce Stevkovski, a master drummer. The collaboration of these merry men encourages inspired performances from the participants, soul brothers who have set themselves the seemingly impossible task of imprinting their souls on an album.

Penelope X is full of charms, where the marriage of musical minds encompasses the best of both of their recent works. Foltin's albums have always had a story and this time it is the journey of Odysseus, the legendary Greek king of Ithaca and the hero of Homer's epic poem the Odyssey. The seven songs (and one instrumental) on the album are inspired by episodes from Odysseus' journey home and his encounters with goddesses, mistresses and sirens, but in this story he never makes home but wanders off somewhere else beyond the pillars of Hercules.

Rich in extraordinary imagery, the album's tales are spun against beautifully mutated grooves, jazz and trip hop themes. The feel and the focus of the album revolves around the rhythmic understanding between Goce Stevkovski and Foltin, while Kodjabashia's ghostly presence floats over with his sonic textures. The album is full of melodic masterpieces and atypically infectious grooves. Again, Branko Nikolov, the experienced captain of the boat, is navigating his crew through stormy seas with his voice and lyrics.

The journey opens with an infectious groove, a gentle stretch of shimmering synths, bells and accordion, all of it driven by Nikolov's joyous voice. In general, Foltin's songs have natural charm and unforced playability, and in that vein, "Kouros" is the perfect opener. "Penelope X" is based on pulsating rhythms that add a distinctly sexy and funky flavor to the song. The whole album builds off these subtle disco touch points, that are expertly woven through the music.

"To Whom Do You Belong Now" is an old song by Kodjabashia, previously done in collaboration with the art rock band DNO on its debut album, Tishina (Chicken Madness, 2004), on which Stevkovski also played. This version has a different kind of intimacy and sweetness to it. Recurring themes from past projects appear here and there. "To Whom Do You Belong Now" also has a few lines from the song "Lo-Lee Ta Too," while "Cinderella Man" is an interesting amalgamation of "Milice" and "Financial Times." All three tracks come from the album Lo-Lee-Taa-Too (Self produced, 2005). "Cinderella Man" is perhaps the album's most radio-ready track, with its sci-fi allure and sparkling beats.

"Dawn of the Rose Red Fingers" is an impressive and playful vocal duet between Branko and Rose Betts (featuring little Angelina Kodjabashia), against a backdrop of beats and symphonic melodies. These dreamy, optimistic yet pulsing sounds revive memories of Royksoppe or Husky Rescue with their downtempo electronica influences, without dwelling exclusively on one particular genre. The electronica flavor can be attributed to Kodjabashia, who has an excellent sense of timing and a clarity of production. He is not a button-pushing man of presets but an excellent composer and a trained pianist.

Penelope X is full of variety. As always, the group is well aware of its strengths and has built layers of details beneath that can go unnoticed, but when noticed, prove easy to treasure. Any dismay at these new retro-futuristic sounds, and the integration of otherworldly concepts, gives way to recognition of an old painting within a new frame. Penelope X is gripping as a dance record, while its gentle melodies are the embodiment of playfulness which makes this record both so special.