By BRUCE LINDSAY
April 2, 2012
Sign in to view read count
One of Iles' earliest recordings was with Anthony Braxton; it was recorded in 1994 but not released until 1997 (Composition No. 175 & Composition No. 126: Trillium-Dialogues M, Leo Records). At the mention of his name, she laughs loudly and, without a pause, exclaims, "That was life-changing." So what was such a life- changing experience like? "I was working with the Creative Jazz Orchestra in the north of England—the orchestra was based in Manchester, and I was in Leeds. It was a really wonderful time for those of us 'up north.' Nick Purnell, the CJO's director, arranged some fantastic projects for about five years: people like Vince Mendoza and Kenny Wheeler also got involved. Braxton came to tour with us. The band included four opera singers, classical percussionists playing hairdryers and drills, string players and a full-on big band. 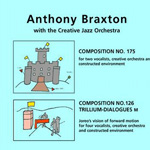 "Braxton was playing music 'in the cracks.' He would talk to us about having faith in your own music; that's what really hit me. He talked about classical musicians not liking his stuff because it wasn't classical, and jazzers not thinking that it was jazz, but he just carried on. He was so committed to the music. It's the hardest music I've ever played: weird time signatures varying almost from bar to bar, followed by a loop when you would be expected to improvise. It was an astonishing sound, and we all committed to it. The album doesn't sound so wild now as it did at the time, but there are some amazing textures on it. He's a truly unique person, and he did pass something very valuable on to a lot of us: follow your heart. A bit clichéd, but it does hold true. Even at 6:00 in the morning, on the coach from Manchester to Sadler's Wells Opera House in London, he was listening to his own recordings on headphones—wild, mad, saxophone sounds blaring out across the coach."

As well as being in demand as a performer and composer, Iles is a highly regarded educator. At present, her main post is at the Royal Academy of Music. She also teaches at the Guildhall School of Music and is involved in the National Youth Jazz Collective which works with up-and-coming, teenage musicians. The talented young players in the NYJC must make her feel positive about the future of music in the UK? "Yes, absolutely. The talent at that age is astonishing. I think about my generation—we were much older when we got to that stage. There's so much more available now, so much more support, courses, advice." The NYJC players also seem very comfortable mixing genres, while their teachers are happy to encourage such an approach. "Yes. It's a great team—excellent teachers who are very open to ideas."

Iles' work diary is pleasingly full, with a varied selection of projects to add to her regular teaching schedule. "I'm recording with Kenny Wheeler. He's working on his 'Mirrors' suite with the London Vocal Project. Mark Lockheart and James Maddren, the drummer, are involved, too. The LVP is an amazing group. It's directed by Pete Churchill, my other half. He set it up after he left the Guildhall, where he'd taught for over 20 years, and its members come from the Guildhall and other London music colleges. The group has worked with Bobby McFerrin, Dame Cleo Laine and Cleo Laine. I'm also hoping to get Printmakers together for a new recording. I'm writing some educational texts for the Oxford University Press. There's also a project with Tina May and some classical musicians, based on songs from '20s and '30s Paris. That's at the Crucible Theatre in Sheffield."

The Stan Sulzmann Big Band and the Karen Sharp Quartet are also benefiting from Iles' piano skills. Domestic life doesn't stop for Iles and Churchill either. "We've just moved house, so that's still taking up a lot of our time." As for the next album with Iles' name on the front, that might still be some way off, but the pianist is appropriately sanguine about the prospect. "It'll probably take me 10 years to do another album of my own. But that's fine."

Mike Walker, Madness And The Whole Thing There (Hidden Idiom, 2008)