Nik Turner: Bringing the Music to the People

By JACK GOLD-MOLINA
February 24, 2010
Sign in to view read count
Nik Turner is perhaps best known as the founding saxophonist and flautist for pioneering "space rock" band Hawkwind. As well as contributing to the profound influence that this band has had on rock and punk with its focus on community and grassroots movements—including its many benefit shows and long-standing support of England's free festivals, Turner may also be the first saxophonist to effectively bring free jazz to rock music. 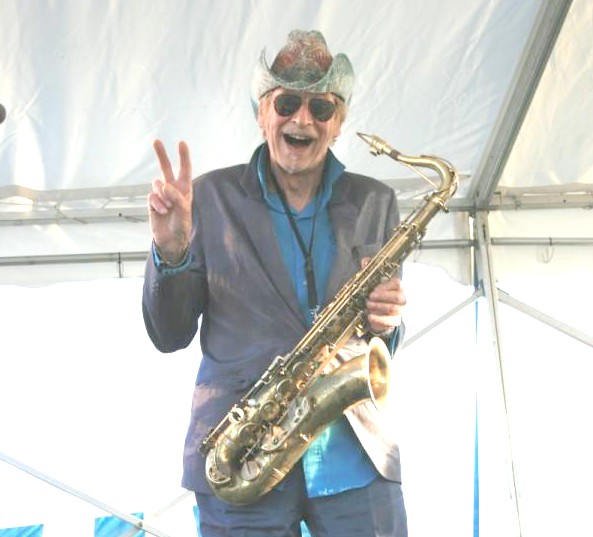 Independent of his work with Hawkwind, Turner has an extensive performance history with his own bands such as Sphynx, Inner City Unit and Space Ritual, and has performed and recorded with such artists as Farflung, the Stranglers, and Sting.

All About Jazz: What influenced you to start playing music?

Nik Turner: I grew up on jazz. Rather, my mother played the piano. She played sort of the stride piano. One of my uncles played clarinet, although I never really heard him very much. One of the first records I bought was "12th Street Rag" by Pee Wee Hunt. I was sort of subjected to a lot of jazz—Billie Holiday and stuff like that. My aunt used to sing like Billie Holiday [laughs]. We used to take turns at Christmas. I remember singing some sort of songs when I was about six. I grew up in a jazzy sort of environment. My mother liked jazz. She was a fan of Oscar Peterson and Jelly Roll Morton and Fats Waller, people like that.

For myself, I was very interested in the clarinet at first. There was a guy called Sid Phillips who was a British jazz clarinetist, and I seem to remember hearing him. I really got into traditional jazz, what they call Dixieland jazz. One of my first influences regarding the saxophone was hearing Earl Bostic playing "Flamingo." I heard it in a jukebox. I used to hang out in a sort of juke joint on my way home from school and they used to have all of the latest records in there. This is like in the '50s, probably about 1956 or '55. I thought it was fantastic. It just really made an impression on me.

Around that time, I can't remember exactly when, I got into Charlie Parker and John Coltrane and Stan Getz. I got interested then in learning to play, initially, the clarinet. I liked traditional jazz a lot. Friends of mine played in trad jazz bands and I used to listen to it a lot. It was quite popular in Britain at the time. There was a guy living up the street from me who was a band master for the Marine band. He taught woodwind instruments and I got a clarinet and had some lessons from him when I was about 17. I used to go to him every week and I learned a few scales. He showed me how to read music a bit.

Having been influenced as well listening to saxophone a lot, I really wanted to get a saxophone. Initially I bought a tenor sax from him, and he said, "Well, if you learn to play the saxophone you must continue to play your clarinet." I said, "Okay," but of course I didn't [laughter]. As soon as I got the saxophone I sort of abandoned the clarinet and got into listening to Art Blakey. I mean, John Coltrane I listened to then, but he was a bit beyond me, at that point. I listened to Charlie Parker. I learned a few Charlie Parker tunes.

Shortly after that I got an alto saxophone. I traded my tenor in for an alto. There was a local band that played around that played a lot of Charlie Parker, Thelonious Monk, quite a lot of that sort of thing—a lot of different bands, Modern Jazz Quartet. But I liked them. I listened to Charles Mingus, and I just listened to a lot of that stuff. There were a lot of jazz musicians around at that time. Modern jazz was becoming quite popular in Britain. This was probably in the late '50s.

At the same time I was listening to rock and roll as well. You know, the Coasters and "Yakkety Yak" and old stuff like that, all the sax parts on those records were played by jazz people, even Bill Haley. I bought a Bill Haley record and [tenor saxophonist] Rudy Pompilli is actually a jazz player, I discovered later.

I was interested in Paul Desmond with Dave Brubeck and I listened to Sonny Stitt. I used to see concerts and ended up going to see Miles Davis. I had been going to trad jazz clubs in London seeing Cy Laurie and Ken Collier. I hung out with, like, Bohemian people at the time. I was very young and they were sort of giving me my musical education. Then skiffle hit Britain and I was hanging out in these little skiffle bars in London. And then I got involved and interested in the modern jazz idiom, listening to John Coltrane then and sort of finding it very difficult and thinking, "Wow, I'd really like to play like that but it's quite hard [laughs]. "

I practiced a bit for quite a while and I learned a few tunes, and never played in a band though, really. I started getting into playing "Intersection" with a band very briefly with my music teacher, then I sort of gave up playing for some time. In about 1968, I went to Berlin and met all of these free jazz musicians that hung out in the Blue Note. I think that's where Eric Dolphy and John Coltrane had played, and I think some of these people had played with them. They turned me on to the fact that you didn't have to be technical to express yourself. I realized then I'd met some guys who played in a band and talked about getting involved in a band with them, and then it just sort of struck me that I could play free jazz in a rock band. That's how I became involved in Hawkwind. 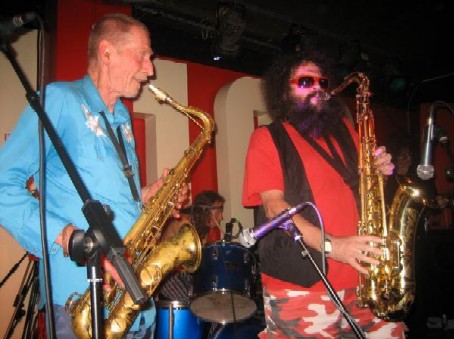 Prior to that I'd played in a couple of bands. When in a college band, my brother played the trumpet. He was at Art College studying architecture. I was in college studying engineering at the same time, and I played in a band with him. We did a couple of gigs. He played trumpet, he had a trombone player, there was a bassist and a drummer. We did a couple of gigs just playing four or five numbers. We were playing stuff like "Foggy Day In London Town" and "My Funny Valentine."

I listened to a lot of Gerry Mulligan and then my brother turned me on to Miles Davis with Milestones (Columbia, 1958). I bought a Cannonball Adderley record, Something Else (Blue Note, 1958)," and I thought I really was into jazz. I read a lot about it and listened to it a lot, and I really found it very exciting but quite difficult to play.

While I was in Holland I was road managing for a black guy who did a James Brown look-alike act—or sound-alike or stage act. I was his road manager and we used to hang out all night in bars in Amsterdam with all of these black guys on the run from the Army [laughter] listening to all this old jazz. He turned me on to John Coltrane's Olé Coltrane (Atlantic, 1961). He was writing a book about black hip-speak at that time.

This was probably about 1967. Psychedelia was happening and everybody was taking LSD and stuff like that. I later discovered John Coltrane took LSD as well. And then I got involved with these free jazz people in Berlin in 1968, I think it was. I listened to Jimi Hendrix when I was in Amsterdam and I thought that was really cool music. I think it was quite influential to me. Miles Davis playing his wah-wah, as well.

I got quite influenced by those things and got involved in this band Hawkwind. The guys in the band were all friends of mine, I had met them in Amsterdam. They had played in a band—I was working on a rock and roll circus as a roustabout and a barman. I wasn't playing music at the time but these guys played in one of the bands that featured there. I eventually got this band together with them, a guy called Dave Brock and another one called Mick Slattery. Incidentally, I work with Mick Slattery still today.

We got this band together, I was going to be their road manager. I happened to have my saxophone in my van, in my car, and brought it into rehearsal and banged away at it playing all of this sort of expressionist music that I learned about in Berlin, and then I was invited to be involved in the band.

They didn't have a name at the time, but we later called ourselves Hawkwind as a result of my hawking—clearing my nasal passages, and my wind—my sort of volume of flatulence [laughs], you might call it. So, we were Hawkwind, then, and I was playing free jazz in a rock band. Then my friend Robert Calvert got involved in the band and we turned into a space rock band. He was a poet, a space poet.