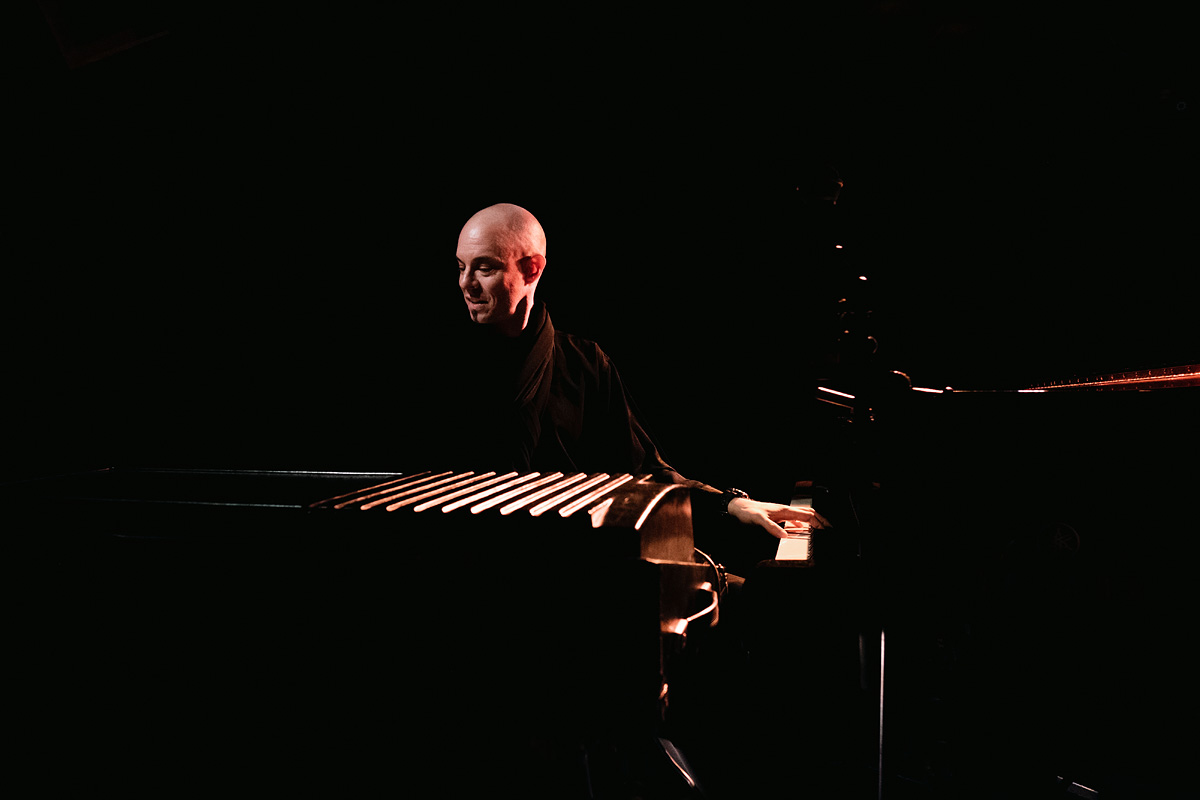 On May 6, 2018, Swiss pianist and composer Nik Bärtsch brought his refashioned Ronin outfit to New York City. The band's name comes from the word meaning "masterless samurai," and indeed listeners can't help but feel that Bärtsch and his melodic warriors have gone rogue for so long that their footprints are practically indistinguishable. At the way station known as (Le) Poisson Rouge—along with reedman Sha, electric bassist Thomy Jordi, and drummer Kaspar Rast—Bärtsch manifested a synergy unlike anything the venue has known since he graced its space in 2012. Said synergy was built on a practical philosophy of cohesion via separation honed over years of discipline. The vibrations of inhale, it seemed to say, were nothing without those of exhale, and vice versa.

The titular concept behind Ronin's latest album for ECM, Awase, posits another Japanese term, which in Aikido denotes a coherence of forces in motion. It's a fitting description of music which, though steeped in precisely notated "modules," takes precedence over even itself as it evolves in real time toward inevitable conclusions. Witnessing each denouement in close quarters gave us a deeper sense of how the music lives through its own becoming, as sentient as those of us basking in its dissipations. As much was clear the moment the quartet took to stage, for Bärtsch's fingers contacted the keyboard before his body did the stool, as if the need to play were already leaping from his body into the muted notes that activated the air. So began "Modul 55," which wound its tendrils around a shattered-and-restored core before blending into "Modul 58," the ascending altoism of which proved just how much Ronin has grown.

Despite the locked-in groove aesthetic fans have come to appreciate, the band took time to breathe at key intervals, as if to remind us (and itself) that being at rest is an active process and that movement is likewise a path to stillness. These dyads bled into something else entirely—integrated wholes by which binary thinking lost all oxygen. Whether in the older "Modul 34" or Sha's original "A," the relationship between instruments was like a voice in the night: finding purchase in darkness to climb in search of the hungry ear. Rast and Jordi were an inseparable unit, maintaining constant visual and spiritual contact with Bärtsch, while Sha's alto streaked across the sky in dreamlike auroras. The former tune's Fender Rhodes accents lent a touch of nostalgia to these otherwise forward-thinking procedures.

The more a body trains, the more its inner architecture is revealed. This was especially true in "Modul 36," which from dampened seeds sprouted something pulsing and alive. Running arpeggios and gorgeous dissonances kept us grounded behind a steady lens of interpretation, even as the scenery changed furiously before it. The same held true for "Modul 45," which within a leaner infrastructure allowed for overtly improvisational bursts of affirmation from Jordi and Sha.

With so much talk of uncanny valleys in the present techno culture, we forget that any dips into postmodern anxiety are offset by the presence of canny peaks. Every utterance from Nik Bärtsch's assemblies is one such peak. By their grace, we are reminded of positive (re)generation and the connections it fosters not only between musicians but also those experiencing their creations amid tangles of distraction. And how blessed we were to share an apex with four seasoned rōnin—masterless, yes, but masterful—surveying a world increasingly deaf to the potential of its own nod into singularity.