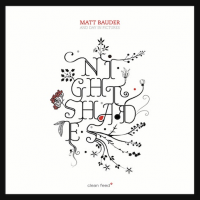 The lesson learned from listening to saxophonist Matt Bauder's second Day In Pictures release Nightshades is that you would never want to take a blindfold listening test with him. He'd steal your records.

The quintet from his 2010 self-titled release on Clean Feed remains intact, with the exception that Angelica Sanchez was replaced by pianist Kris Davis. Otherwise, the musicians: Nate Wooley (trumpet), Jason Ajemian (bass) and Tomas Fujiwara (drums) nourish Bauder's vision that innovation in jazz in not inconsistent with the jazz orthodoxy. That is, jazz Tradition with a capitol "T."

The quintet works within the tradition, but also subverts it with extended technique and multi-phonics, bits of noise, some free music, and odd rhythms presented within the context of the melodies. Like a hypnotized audience member who won't remember she quacked like a duck, the seditious parts almost go by almost unnoticed. Bauder is a connoisseur of the 1960s Blue Note sound, one that would explode into the avant-garde and New Thing, but it still had to please Alfred Lion's ear. "Parks After Dark" fleshes out some post-bop until Wooley's growling breathy trumpet and Bauder's snickering saxophone push the boundaries out just a bit further. Where the revolutionaries needed to heave-ho the music and jilt their forefathers, Bauder is content to celebrate the revolution without declaring independence and forming a free state.

The quintet imagines Albert Ayler's world on "August and Counting," with all the love cry and ceremony, Ajemian's bowing holding up the horns as they repeat their incantations, summoning the higher powers. The odd-metered "Rule of Thirds" picks through the notions of Andrew Hill as Bauder streams multi-phonic notes over Fujiwara's busied percussion. They deliver a gorgeous ballad "Starr Wykoff" and a bit of New Orleans shuffle with the title track. Each an attractive piece, and each cleverly surreptitious.