By Doug Collette
September 17, 2022
Sign in to view read count 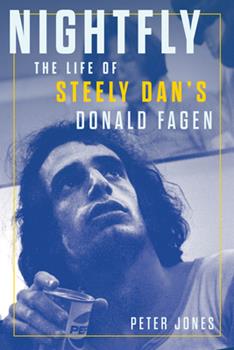 In his introduction to Nightfly: The Life of Steely Dan's Donald Fagen, author Peter Jones could hardly have drawn a more clear outline for his biography of Steely Dan's co-founder. As a result, it only stands to reason that Fagen's late creative partner and friend Walter Becker makes his first appearance around the thirty-page mark of the book. Or that the writer's account of the evolution of The Dan has reached its fourth studio album, Katy Lied (ABC Records, 1975,) a mere seventy-pages or so later. According to the writer, Donald Fagen resisted requests to be interviewed for Nightfly. Nonetheless, Jones' description of the means by which the proper sound of a gong was affixed to the Duke Ellington cover of 'East St. Louis Toodle-oo" on Pretzel Logic (ABC Records, 1974) actually sounds like one of the arch comedy bits he relates that Fagen and Becker oftentimes employed during their press encounters. Whether or not that's merely an apocryphal tale designed to lighten the mood, its inclusion renders the writer's narrative a more realistic reflection of his subject and his work.

Still, The Life of Steely Dan's Donald Fagen is not exactly what the man's public image might lead a reader to believe. Certainly, like Bard College schoolmate Becker, the eccentric loner had his own motivating forces that kept him aloof from society at large. But dating back to his grade and high school days, Fagen's disaffection for the lifestyle values of his parents led him directly to passions that ultimately lent purpose to his life: his abiding interests in jazz music, science fiction, reading and noir films all became prominent influences on his creative output.

He is unabashedly sincere in his pursuit of those subjects, so much so in fact that, as a palpable result, Donald Fagen developed an acerbic, ironic attitude that functioned as the foundation of the man's personal and public persona for the better part of his adult life. The way Peter Jones tells it, with matter-of-fact objectivity, the musician/vocalist/songwriter's hands-off means of interacting with the world, including virtually all his bandmates and collaborators except Becker, was no pose, but rather a natural expression of his personality.

Implicit in that perspective is that this idiosyncratic songwriter/musician/vocalist has always been a man of principle(s). Not that everyone who interacts with him understands exactly what those are, but as his biographer tells it, when Fagen chooses to speak at length, has never been one to mince words (or actions for that matter). Peter Jones is most perspicacious in seeing the man's perfectionism as an almost (?) obsessive by-product of his work ethic (one he shares with his songwriting and recording partner). Though he may take the stance a bit too far, the author's healthily-detached perspective thus renders inevitable his emphasis on Fagen and Becker's latter-day working methods on Steely Dan albums.

Of course, those processes can be fascinating in and of themselves, but perhaps only if the reader is curious about how recordings are made and in how many different ways. After the dissolution of the early version of the band, at their behest, the co-leaders explore the options of hiring session men, an approach which ultimately takes on a life of its own. But that too is Jones' means of exploring the psyche of the two men, especially his chosen subject for this book. And while he is forced to rely on third party interviews with Fagen or musicians like Steve Khan who participated in Steely Dan sessions, the thirty-five pages of notes for Nightfly are evidence of the author's generally scrupulous attention to detail.

Along those lines, it's fair to suggest that, in writing this book, Peter Jones is channeling both Fagen and Becker to a great degree. The plausibility of such a notion deepens understanding of his loyalty to The Dan—he possesses more than passing knowledge of live bootlegs, studio outtakes, fanbase publications, etc.— and presumably, he wouldn't take on this initiative if he were not a long-time devotee. To the jazz musician/journalist/author's great credit, though, he avoids crossing the line from aficionado to fanboy, at least for the purposes of this tome.

So, again it's little surprise the writer/musician also sets up the reunion of Fagen and Becker in subtly dramatic fashion. To be sure, it's indicative of their individual and shared personal growth that the first 'new' project under the band's name takes place on the stage rather than in the studio. But the reasonable depth into which Jones explores the solo activities of the two men, creative and otherwise, clearly frames their shared endeavor for the purposes of illustrating how things have changed, both for the two frontmen and the marketplace to which they are returning.

Peter Jones' writing becomes duly involved when he delves into the artistry and psychology of Donald Fagen, as well as those with whom he collaborates, he doesn't allow his accounts of any partnerships to exist in a vacuum. In so doing, he imparts a real-time air to, for instance, Fagen's re-emergence into public performing around New York City; his resumption of work with Becker then becomes almost inevitable, even though the latter resides in Hawaii during that same period, pursuing his own interests in producing other artists like English new wave and synth-pop band China Crisis.

As a revived Steely Dan began touring regularly, both Fagen and Becker continue to experience some hard-won personal growth. Neither of them might rightly be described as mellow, least of all Fagen, but there is nonetheless a sense of an inexorable arrival of some maturity, or at least a reasonable facsimile thereof. Rather than express bitter resignation about how the world (and they) had changed since they last performed concerts, however, both avow a reasonable measure of acceptance.

It's that very viewpoint that renders gratifying the generally positive response to the product of their return to the studio, Two Against Nature (Warner Bros., 2000). As Jones describes its gestation, Nightfly evolves from a primer on the art of studio recording to one that accurately depicts the life of the aging rock (sic) musician. And while that perspective may limit the book's appeal to a degree—do fans of Harry Styles or Olivia Rodrigo wonder what those two contemporary objects of fascination will be doing as they hit their seventies?—that particular angle renders it required reading, not just for Steely Dan fans, but other devoted music lovers of the same demographic.

If Nightfly ends on an oddly unfinished note, it's also true that neither is Donald Fagen's life and career. As the narrative of the book so closely parallels the evolution of its subject, it will be interesting to see what, if any, additional content appears in the inevitable paperback without allowing anything approaching gossip— personal affairs and relationships, legal issues, etc.— to undermine his self-professed vision of a 'critical biography' (regardless, the error in album track designation on page ninety-two should be corrected).

Maybe by that time of publication too Donald Fagen will have even grown sufficiently comfortable with himself and the world around him to consent to speak with Peter Jones. If nothing else, such an interaction would provide an opportunity for the self-styled Jewish iconoclast to use the same winning tone he maintained in his book of essays, Eminent Hipsters (Viking, 2013), as means to comment upon that which becomes illuminated to such a great degree in these three-hundred sixty-eight pages.