By KARL ACKERMANN
October 1, 2018
Sign in to view read count 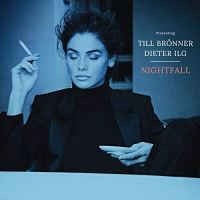 Trumpeter Till Bronner is widely lauded in his native Germany and throughout Europe. He has had broad success not only as a jazz composer and musician but also in film music, pop and country genres. Brönner has recorded eighteen albums as a leader and worked with Monty Alexander, Dave Brubeck, Al Foster, Joachim Kuhn, Nils Landgren, James Moody, Aki Takase, Ernie Watts and many other noteworthy artists. On Nightfall, he is paired with countryman and bassist Dieter Ilg whose sole recording credential to date is Hut Ab! (Inakustik, 1997) with Albert Mangelsdorff. Ilg, primarily an academic, has performed with Randy Brecker, the WDR Big Band, Wolfgang Dauner, Charlie Mariano, Marc Copland, and Wolfgang Muthspiel. Prior to the release of Nightfall, Brönner and Ilg had been touring Europe.

Even with its reinvented, slow bluesy theme, Leonard Cohen's "A Thousand Kisses Deep" is a bit livelier than the composer's original, and more imaginative than the 2003 Chris Botti straight-ahead trumpet cover. Ornette Coleman's "The Fifth of Beethoven" is given a rounder feel with Brönner's flugelhorn sounding richer than Coleman's upper register alto sax, and Ilg does a more than respectable job of covering Charlie Haden's part. The title track—one of three penned by the duo—is a beautifully moody piece that sets up a cleverly updated take on the Kern-Hammerstein standard "Nobody Else But Me." The diverse set includes the Lennon-McCartney classic "Eleanor Rigby," Johann Sebastian Bach's "Air" and yet another rendition of "Body and Soul"—fortunately, an inventive version.

Brönner has often been compared to Chet Baker and clearly self-identifies with the classification. His Chattin' With Chet (Universal Music, 2000) pays homage to Baker and—to a lesser extent—Dizzy Gillespie. The varied material on Nightfall allows for a broader perspective of Brönner's sound, and approach, to very different musical situations. From the stunningly forlorn sacred music of the renaissance ("Ach bleib mit deiner Gnade") to somewhat agitating pop hits like the will.i.am/Britney Spears' "Scream & Shout," or the duo's abstract original, "Wetterstein," Brönner and Ilg are adaptable to whatever ingredients they have added to the menu. Nightfall isn't earth-shaking but it shines at times and is never less than entertaining.