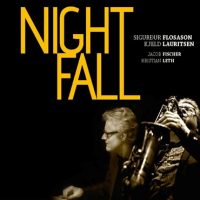 Icelandic saxophonist Sigurdur Flosason gets a pretty unique sound out of his instrument. His silky, rhapsodic style of playing harks back to Johnny Hodges but with more bite. There are only the very faintest echoes of Charlie Parker and hardly any of John Coltrane.

Yet Flosason is both inventive and soulful. This is quite remarkable in that he hails from a country known internationally only for cod and—musically—the dismal wailing of Bjork.

Small wonder he decamped to Denmark. Here he has teamed up with Hammond organist Kjeld Lauritsen and guitarist Jacob Fischer for this lovely album dedicated to the onset of night.

If jazz has a future it is surely with music like this, rather than the experimentation of its lunatic fringe. Nightfall is proof that genius can still be tuneful.

Flosason and Lauritsen put it modestly: "Jazz is often at its best when played spontaneously after nightfall just for the joy of the music itself."

Unsurprisingly, the tunes they play are standards, kicking off with "These Foolish Things," a litany of nostalgia immortalized by Billie Holiday. Dusted off by Flosason, Lauritsen and Fischer, the old ballads sound new and alive again.

None more so than "I Only Have Eyes For You" and a wistful version of the ofttimes schlocky "Young At Heart."

There are also fine versions of such neglected numbers as Gershwin's "For You, For Me, For Evermore," "Skylark" by Hoagy Carmichael and Johnny Mercer, and Ray Noble's "The Touch Of Your Lips."

Melody and invention abound on this album. Angst, dissonance and the musical theories of Arnold Schoenberg— mercifully—do not.

These Foolish Things: For You, For Me, For Evermore; Angel Eyes; The Touch Of Your Lips; Skylark; Tea For Two; Too Late Now; Why Try To Change Me Now?; I Only Have Eyes For You; Young At Heart.

About Sigurdur Flosason and Kjeld Lauritsen