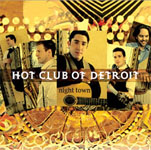 The Hot Club of Detroit is one of many bands that have been inspired by the work of Django Reinhardt with the Quintet of the Hot Club of France, though leader and guitarist Evan Perri's group omits the violin, instead utilizing accordion and saxophone. Yet the band's second CD doesn't exclusively stick to Gypsy jazz and swing, also delving into early jazz, bop and post-bop, along with Perri's compositions.

The spirit of Django is very much alive in their playful arrangement of "I Want to Be Happy," with Carl Cafagna's potent tenor and Jullen Labro's playful accordion complementing Perri's intricate guitar work. The Hot Club takes the time to explore Reinhardt's less frequently played works, such as the elegant waltz "Valse a Rosenthal," the chugging "Melodie Au Crepuscule" and the humorous "Django's Monkey" (an arrangement based on "Django's Tiger," itself a set of improvisations on "Tiger Rag"). Cafagna switches to soprano sax for a relaxing treatment of Jelly Roll Morton's "Sweet Substitute," followed by a romp through the tenor battle warhorse "Blues Up and Down" that blends Gypsy jazz and bop, with Labro taking the role of the second tenor on accordion. Miles Davis' "Seven Steps to Heaven" leans more heavily into post-bop, though the Gypsy rhythm underneath provides plenty of power for Cafagna's burning tenor. The originals also merit attention. "Two Weeks," a lush Perri-Labro collaboration, blends samba and swing, while Perri's elegant "Night Town" has a Latin undercurrent suggesting a brisk stroll at dusk on a breezy evening.