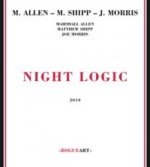 Unlikely combinations sometimes deliver the most enjoyable results. Take the unexpected pleasure to be derived from what must have one time seemed unpromising pairings such as chili and chocolate or garlic and bread. So the partnering of Sun Ra Arkestra regular Marshall Allen with pianist Matthew Shipp and long time associate Joe Morris yields an astonishing and joyful return on Night Logic, a live recording detailed with in-your-face sound from NYC's Roulette, spread generously over ten self-contained abstract improvisations spanning some 70 minutes.

Allen, who joined Sun Ra in 1957, has only appeared sparingly outside the Arkestral confines, with All Star Game (Eremite, 2000) with Kidd Jordan, his quartet with Tyrone Hill, and the quartet with Mark Whitecage Mark'n'Marshall (CIMP, 1999), being especially notable. Shipp, one of the most distinctive modern keyboard stylists, has in recent years concentrated on acoustic piano in solo and trio settings, the latter often featuring the bass of Joe Morris. Also an accomplished guitarist, Morris' extensive discography as leader is swelled by sideman appearances, notably with David S. Ware's Quartet on Shakti (Aum Fidelity, 2009).

Allen's expression here is subtly different to his work with the Arkestra, in that it is more expansive, alternating between breathy vulnerability and the expected shrill falsetto exclamations on alto saxophone. Variety prevails, vouchsafed by a second suit of pure-toned airy flute and measured deployment of EVI squeals and buzzes.

Whether in deference to the veteran saxophonist or not, Shipp eschews familiar patterns and his characteristic thunder and lightning hammered passages in favor of a probing engagement, whether plucking under the bonnet or crystalline runs of liquid droplets which complement and and provide counterpoint to the reedman's trajectory. The pianist also meshes closely with Morris whose deep moody arco provokes a particular thrill, greater even than his dexterous pizzicato or booming bass notes anchors.

In spite of the instrumentation, the program is too urgent and rhythmic to come across as chamber jazz. Nonetheless the interaction of the three participants is an unalloyed delight. Although at times they stick with a single mood as on the pulsing "Cosmic Hammer," often there is a mindbending switch as with "Particle Physics" which starts darkly extreme, before midway through evolving into a boppish hymn with ethereal flute. Highlights are too numerous to call but include the brooding and mysterious "Ark of the Harmonic Covenant," "Blow in the Cloud" showcasing excellent interplay between Shipp and Allen, and "New Age For The Milk Sea Nightmare" which traces an arc from melancholic tenderness to tempestuous uproar and back again. Ringing the changes guarantees interest, hence "Particle Physics" is a duet for Allen and Morris, while "Heart Aura" is a lyrical acapella abstraction for Allen's alto and the closing "Res X," a showcase for Morris' gut wrenchingly resonant arco, bringing the disc full circle with its echoes of the opener providing a strong subliminal prompt to hit the play button once again.