Frank Morgan: Night in the Life: Live at the Jazz Standard, Volume 3 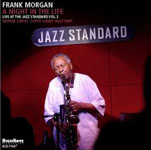 The jazz recorded on these three discs is bebop from the source. It is no mistake that Morgan is well versed in Charlie Parker's "Ornithology, having studied the doomed master closely in the late 1940s and early 1950s. On this recording alone are razor sharp treatments of "Confirmation and "Billie's Bounce as well as Tadd Dameron's "Hot House. Had Bird had the advantage of the superior recording environs found today, I would only hope he would sound as good as Morgan in this performance of "Confirmation. That alone is enough bebop to send one into a swoon. On the first two recordings from the Jazz Standard sessions are the para-Parker staples, "Old Folks, "Cherokee, and "Summertime.

Morgan's tone is incredibly virile and his intonation clear and precise. There is damn near nary a squeak or snort coming from his horn. His playing is near vibrato-less. "It's Only a Paper Moon is paper dry with a Zoot Sims lyricism, though tarter in tone. George Cables, who has in recent years suffered from poor health, sounds in outstanding form. Art Pepper favored him as a pianist, calling Cables, "Mr. Beautiful. Dexter Gordon was also partial to Cables' pianism. It is no surprise the simpatico the pianist shares with Morgan. Cables' sensitivity on ballads plays perfectly with Morgan's almost wounded tone on the same.

Bassist Curtis Lundy solos robustly while the irrepressible Billy Hart keeps perfect time. Night in the Life is a welcome addition to the Morgan catalog. Hopefully there will be a complete Live at the Jazz Standard box in the future.

Confirmation; On Green Dolphin Street; Half Nelson; Hot House; Billie's Bounce; It's Only A Paper Moon.