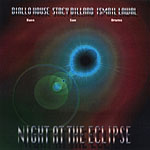 Every time a group of sax, bass and drums step to the stage on their own, it amounts to a high-wire balancing act for three. Luckily, these guys have the skills to cross safely to that other end of the tightrope, and keep doing it better and better. They've been establishing themselves in New York for years, playing clubs like Small's and Fat Cat, and they've jammed in Union Square before. Hearing them play together evokes a certain sound of joy, not just because they go deep into the theory of the music, but because they have the rare skill to keep it fun.

Lead voice Stacy Dillard is a name to watch out for. A lot of saxophonists nowadays enter the studio with a ridiculous technique. Dillard has the rare ability to turn his touch on the horn into something new. His playing has that same quality of surprise as a top baseball pitcher who can invent a new sinker or curveball out on the mound and to make the ball dip in a way no one's ever seen before. His tone is deeply personal, mellow at points, and tinged with the old schools.

On the heads of tracks like "Three Sides," "Mykiss," or "JD's Blues," Dillard's sound practically bursts with hints of tenors past. At the same time, his soloing in each of those tunes rolls on distinct funk patterns and hip-hop rhythms, along with vocal cries that show his style is nothing mellow. New things simply blossom out of his horn, and in the process, he exhausts the possibilities of each tune.

Diallo House, on bass, lays down deep, heavy lines grounded in a foundation of intricate, modern jazz-funk. He also shows off some beautiful compositional touches with tunes like "Atiba Blue," a slow burning piece of soul-jazz with a sexy R&B groove and some upper register moaning from the tenor. Ismail Lawal's drum work is bright, reflective, and ecclesiastic in a gentle kind of way.

Most of the soloing goes to Dillard, but the elastic accompaniment keeps the mix moving nicely on a mix of heavy funk grooves. The only problem, really, is the fact that the recording quality isn't always perfect. Levels don't stay consistent in each track, and the sax sometimes drops out of range. Even still, it's not enough to obscure the heat going on within this band.

The title track closes things out at high velocity. House could be peeling the strings off his bass, and Lawal sends up crashes of cymbals-both in answer to the testifying sax. Dillard runs halting patterns mixing the high-speed logic of code with the emotion of gospel. It ends abruptly, as if the bar had to call last round in the midst of a hot jam just before dawn. That's the excitement driving this music on. Every note sounds full of possibility, like something fresh can happen at any hour, and hints to many fun nights to come.