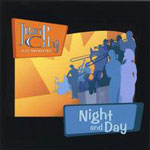 I know nothing about the Pennsylvania-based Jump City Jazz Orchestra except the obvious: this is an ensemble whose mission is to entertain, created in the image and following the lead of the storied dance bands of the Swing Era—Miller, Goodman, the Dorsey brothers, Harry James, Charlie Barnet, Ray Anthony and other kindred souls.

The question thus becomes, how well does it succeed? The answer, based on this overview of the band's work, is quite well indeed. In other words, if I were hosting a dance, I'd hire the JCJO without any qualms about receiving full value for the money. The nineteen-piece ensemble (including vocalists Keith Spencer and Karen Wilhelm) is tidy and proficient, and if the music is by and large immediately recognizable, it is at least well-played. I don't know if these gentlemen (and two ladies) are professional musicians or part-timers, but they play together like pros.

Half of the dozen tracks are vocals, three each by Spencer and Wilhelm, and there are bright showcases for trumpeters Bob Wagner ("Take the 'A' Train ) and Jay Webb ("Georgia on My Mind ) and the band's most persuasive soloist, alto saxophonist Vince Lardear (the samba "Little Girl, Don Schamber's definitive arrangement of "Time After Time ). One of Wilhelm's vehicles, "Perhaps Perhaps Perhaps (nice work there by the lead trumpet), is used as the theme for a popular British sitcom, Coupling.

She's also heard on Cole Porter's "Night and Day and the Gershwins' "S'wonderful, Spencer on "Fly Me to the Moon, "Ain't That a Kick in the Head and another Porter favorite, "I've Got You Under My Skin. A delightfully swinging version of "That's All precedes a bonus track, Wilhelm's vocal on "Crazy, which isn't listed on the CD's tray.

The JCJO doesn't tailor its music to suit the staunch jazz aficionado who prefers elaborate contemporary material and lengthy, cerebral solos. But for those who appreciate the bands that laid the groundwork for today's more resourceful and sophisticated ensembles, there's a lot to admire and appreciate here.

In the Mood; Night and Day; Take the