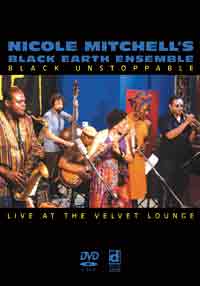 Mitchell, who plays flute, piccolo and alto flute, is a master technician who bares her soul with every note. Her improvisations are free-flowing and thoughtfully developed. She combines a free- spirited approach on the bouncy opener "The Creator Has Other Plans for Me" with acrobatic prowess on the angular "Cause and Effect" and the blues-drenched "Love Has No Boundaries."

Boykin is a stoic figure on the bandstand. His larger-than-life sound on tenor elevates each piece to a higher level of spiritual awareness. Young brings a playfully aggressive element to the ensemble. His trumpet solos are brazen, moving in and out of traditional harmonic boundaries with ease and assuredness.

Musical boundaries are stretched wide on the freely moving title track, featuring an extended, aggressive bass romp by Abrams and an inventive solo by Parker, who makes creative, tasteful use of effects. The contrapuntal theme and rhythmically-open nature of "February" sets up a solid solo by Mitchell on alto flute, along with a go-for-broke statement by Boykin that is brief, yet inspiring. The disc ends with "Thanking the Universe," Mitchell's buoyantly funky message about fate, love and gratitude. Nwaogwugwu's soulful fervor, Boykin's energized testifying and Parker's rocked-out wailing bring a fitting close to an inspiring, even provocative set—one moreover that resists if not defies easy categorization.

The bonus commentary by Mitchell gives valuable insight into the groupâ????s evolution and the inspiration behind each piece.

Tracks: The Creator Has Other Plans for Me; Life Wants You to Love; Cause and Effect; Love Has No Boundaries; Black Unstoppable; February; Thanking The Universe.