By NENAD GEORGIEVSKI
July 13, 2013
Sign in to view read count 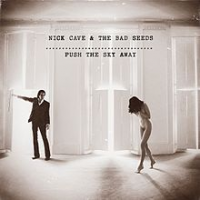 Strangely beautiful, lush and stately, the Bad Seeds' Push the Sky Away is an absolute wonder of a record. It is bold, emotionally charged, beautiful, baffling and gorgeously intimate. After the fired-up extravaganza in the form of the Grinderman juggernaut, surprisingly there comes a record that is totally devoid of that volcanic noise and menace that eventually influenced another Bad Seeds record, released between the two Grinderman records, the magnificent and raucous Dig Lazarus Dig (Mute, 2008). But three records and one soundtrack away, there comes another one that unlocks the beauty hidden just below the band's surface, with its lush harmonics and soothing textures that bathe in an almost unearthly light.

One of the reasons for that would be the departure of guitarist Mick Harvey, who has worked with Cave since the late '70s and was the last original member of the Bad Seeds since the band's formation 30 years ago. With the absence of Harvey's prominent lead guitar and involvement, the arrangements give emphasis on various small groups of strings, bass, loops, guitar plucking, but the new sonic path is more a result of the band adroitly expanding its sonic breadth over the years.

The first indication of a change of pace, tone, temper and direction comes with the first single and album opener, the tender and poetic "We No Who U R," which weaves resonant melodies that sigh with an air of resigned melancholia. In combination with Cave's weary, tenderly understated, quietly defiant voice and backed by a gentle and dramatically poised choir, it emphasizes a quality of human warmth often absent in most of today's hi-tech digital pop. As such, it never delves into sadness but stays afloat in a warm, soothing bath, a small, perfectly formed, song that doesn't quite yield its mysteries and leaves one longing for more.

This sudden turn towards more reflective music without the ever-present grand theatricality is not a novelty, as Cave and the Bad Seeds did the same thing years ago with the Boatman's Call (Mute Records, 1997), a stripped-down and a very intimate release, as well as on No More Shall We Part (Mute Records, 2001). As such, Push the Sky Away is a bold artistic statement. With its beautiful constituent parts—shimmering psychedelic pop, engrossing passages of drowning synths, ornate arrangements and ethereal strings—it provides a different yet perfect backdrop for Cave's stream-of-consciousness lyrics. Cave is a candid lyricist who conveys the piercing emotional vulnerability of country blues and a confrontational punk swagger; his mind is more like a spring of unusual inspirations and darkish beauty. By his own admission, he found inspiration on the Internet or through "Googling curiosities," and being entranced by Wikipedia entries where he focused himself on "how on the internet profoundly significant events, momentary fads and mystically-tinged absurdities sit side-by-side."

The opener sets a fine tone for the best of what follows, the songs benefitting from the simultaneous beauty and restraint that bring a quiet fire. Songs like "Wide Lovely Eyes" "Water's Edge" or "Jubilee Street"—with its prevailing narcotic and music box-like melodies—are beautifully crafted marvels. But not only textures shift from song to song; the emotional spectrum alsomshifts and widens, and the language is more metaphoric than forensic. "Jubilee Street" is a lament over a murdered prostitute. The song, with its steady rhythm and infectious guitar, just keeps on building a quiet intensity as it progresses, and the breaking violin section feels like a light emerging from darkness—only to be engulfed once again.

"Finishing Jubilee Street" is about a dream Cave had after he had finished working on "Jubilee Street," enunciating the lyrics that also mention a child bride. But the album's most affecting moment comes on "Mermaids," a slow-burn track with its intriguing lyrics, dense, thoughtful instrumentation and haunting chants that hit like a sugar rush. The closer, "Push the Sky Away," is an astounding piece of music, its brooding synth notes evoking chillingly dark subtones that give it its eerie majesty.

The band's gifts are abundantly in evidence everywhere, and never before has the band's densely textured arrangements been deployed to such moving emotional effect. With layer upon layer of keyboards, sounds, percussion, strings and electronic embellishments, these songs are not so much songs in a classical sense as they are musical meditations—mini-symphonies that evolve more thematically than through any kind of conventional song structure.

Push the Sky Away doesn't sound like any other album and, for that matter, it doesn't even sound like Bad Seeds either, yet there's no mistaking the record's brilliance for anybody else.

About Nick Cave & the Bad Seeds