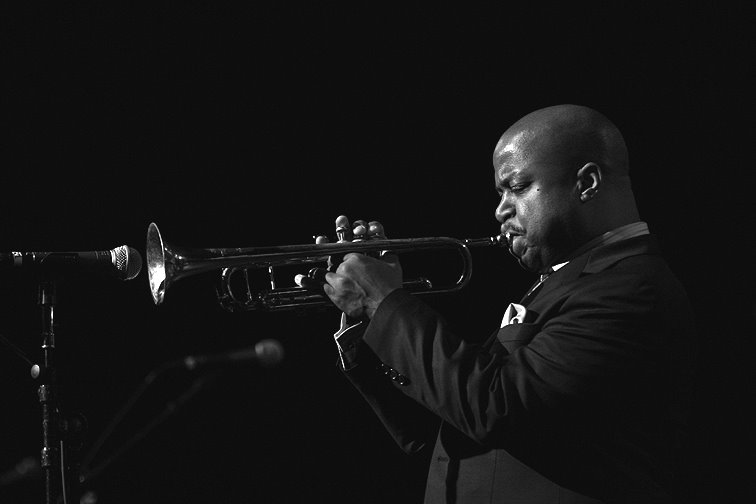 Pressing the unmuted bell of his trumpet right up to the microphone, trumpet player Nicholas Payton invited, impressed, seduced and surprised the crowd at Scullers Jazz Club in Boston. Yet he never assaulted the audience, despite power and confidence to burn. Immense energy was being channeled, but never restrained.

Thursday's 8:00 pm set began at the darkest ends of both register and mood. Payton's velvety low register purred into a rich free-form wash alongside Lawrence Fields on both acoustic piano and Fender Rhodes, Kris Funn on bass and Ulysses Owens, Jr. Jr. on drums. Contemplative tones gave way to Payton's athletic upper register as he called an in-the-pocket samba to order. While Funn and Owens prodded Nicholas's popping high notes and gutbucket smears, they eased back behind Fields' climaxing keyboard runs. Throughout the evening the young pianist's imagination was catalyzed by spacious accompaniment, while Payton energetically sparred with denser bass and drum commentary. Funn and Owens adapted themselves seamlessly, showing why half the experience of jazz is hearing how musicians listen as well as play.

The quartet's quick ears and sensitivity allowed Payton to forego announcing or even separating tunes. After his trills and sparest of syncopations deconstructed "Straight, No Chaser," the band moved through an extended exploration of musical settings, with only applause to demarcate any division between styles. Payton relentlessly led by example through his horn. After a gripping drum solo, he bugled a four-note theme that dialogued with Owens before jelling into the bass line for an extended funk odyssey. Never one to take the easy route, Payton sported a dark, reflective sound during the upbeat soul groove, and later indulged in crackling, diaphanous tones over a plush ballad feel.

Brief flirtations with "Confirmation" and "Come On Get Happy" brought the long-form excursion to a lighthearted close. Perhaps the starkest emotional display of the evening followed, when Payton sang a smoky ballad and then a tribute to his hometown, "Right Here in New Orleans." Payton has sung on record, a reminder of some other singing trumpeters before him. His plaintive, shaded voice, barely reaching the back of the club, was a jarring foil for the power of his horn.

Defying expectations of his own instrument all night, Ulysses Owens' drums simultaneously flowed and thundered. Even his loudest accents added to ensemble fluidity and shape. His attention to the textures of the drum set as well as its rhythmic devices was evident in his sonorous, perfectly orchestrated toms and cymbals. At one point he switched his drum's snares on and off while maintaining a one-handed roll. Not only was it technically impressive, dramatically it was the percussive equivalent of a symphonic development. By contrast, in soloing, Chris Funn's blunt tone and lack of continuity stuck out next to his band mate's narrative sense, yet he remained an empathic, stirring presence in the ensemble up to the last chord.

Speaking only once to close the evening, Payton announced the band members' names and wished everyone a good night, before asking with a smirk, "So is that it?" An encore of straight-ahead, supercharged, quicksilver bop indicated that for Nicholas Payton, that's never it.