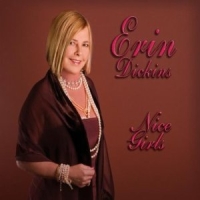 Erin Dickins is notable for being one of the founders of jazz vocal group The The Manhattan Transfer. Since that time, the singer has been quite the journey- woman performer, occasionally taking time off from the music industry. She concludes one such sabbatical (10 years) with the release of Nice Girls, a patiently assembled collection of show tunes and not-so-standard standards.

The erstwhile title tune, composed by Jerome Leshay and Bobby Troup, was originally recorded by Julie London for her 1967 Liberty release of the same title. It has enjoyed relatively little coverage, appearing most recently on Kathy Kosins Vintage (Mahogany Records, 2005). Dickins' take on the chestnut is crazy sexy and breathless. Dickins possesses that ability all great singers have, to make the slowest ballads sound effortless. Her voice is light a coquettish, coy and smiling. A refined arrangement and spare instrumentation showcase this talent, welcoming it back.