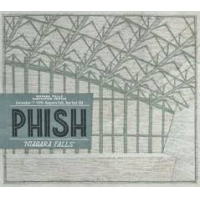 When Phish played the Niagara Falls Convention Center on December 7th 1995, it'd be fair to say the band was hitting its stride with its art and its audience. Having played together for a dozen years at this point and cultivated a loyal and increasingly large coterie of followers, arguably as idiosyncratic as the Vermont-based group itself, the quirks that endeared Phish to their original followers—like the barbershop acapella chestnut "Hello My Baby"— were morphing into more broad eccentricities (the second of their ongoing giant chess matches continued here to be completed at year's end) that were proving accessible to a larger fanbase. In the year of Jerry Garcia's death and the ostensible dissolution of the Grateful Dead, that community, after years of nurturing via a new means of word of mouth (aka the worldwide web) was ready to mushroom.

Thus, Phish played their way self-assuredly toward New Year's at Madison Square Garden, warming up via the bluegrassy "The Old Home Place" and further stretching their collective musical muscles with "The Curtain." Songs already familiar to the groups followers, such as "AC/DC Bag," functioned as gear- shifting toward more open-ended improvisational pieces like the exquisitely mellifluous "Slave to the Traffic Light" and "Possum" that remain staples of the quartet's repertoire today.

And for good reason: linked by compact numbers such as "Bouncing Around the Room," Phish paced themselves on stage in such a way that they maximized the dynamics of the concert and retained the attention span of the audience. Why else tease Iron Butterfly's FM radio classic "In A Gadda Da Vida" during "Split Open and Melt" if not to test their own openness to the spontaneity of the moment as well as the attendees' musical acuity? The light touch and intricacy of their interaction on "Reba" are the stuff of their contemporary legend and rightly so, while the ultimately ferocious ambience of the digital loop jam at the end of "Weekapaug Groove," abbreviated as it is, stands as a harbinger of the 'Island Tour' of spring 1998.

Enclosed in pastel green graphics, the partially-glossy segments of which provide a contrast that makes the overall design more vivid, this triple-fold digi-pak of discs includes a double- sided single-sheet of credits as well as coupons allowing download of video from this performance officially unavailable elsewhere (as well as this full release in mp3 format). These enclosures augment the remastering of the complete two-set performance and the bonus inclusion of a slow version of "Poor Heart" from the soundcheck that further reaffirms the vigorous and justified confidence Phish felt at this juncture of their career.

Thus, Niagara Falls is fully in keeping with the personalized (and deceptively professional) means by which Phish has, throughout its history and in a decidedly reciprocal relationship with its followers, offered varied modes of music to dote on—and worthily so.