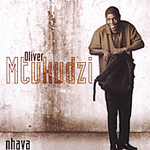 It's been thirty years since Oliver "Tuku Mtukudzi released his debut single, and in that time the Zimbabwean superstar has managed to cement a very distinctive sound. Together with his Black Spirits band, Tuku has developed a fusion of traditional Shona music with other southern African idioms, colored by faint blues and country overtones, that somehow always seems uplifting, no matter how serious a message it may embody. Open ears around the world have caught on to his accessible sound, making him a global icon of Zimbabwean culture rivaled only by his fellow countryman (now expatriate), Thomas Mapfumo.

And Nhava, Tuku's Heads Up Africa debut, is pretty close to the level of last year's very fine Shanda. It's got the same earthy grit and honesty, carried in large part by Mtukudzi's voice, which is agile and warm but hardly virtuosic in any conventional sense. It's also got the same depth of message—the socially conscious lyrics, folky in the most transparent sense, are not spelled out word for word, but carefully explained in the valuable liner notes. They touch on hope and action, the virtues of working together, family love, awareness, and the importance of respecting the environment, among other topics—often phrased using the poetic delivery that's long been an essential part of Shona music.

Tuku's arrangements for his ten-piece band are intricate but never busy, interlocking voices in criss-crossing rhythms and trading harmonized choruses with instrumental counterpoint. One can get a sense of how he builds up this network of sound by listening to the way themes are traded lightly and deftly among instruments, always supporting the human voice. Mtukudzi made a very rare solo appearance minus the Black Spirits on the recent Ndega Zvangu (Tuku Music/Sheer Sound, 2001), performing alone with his guitar, and this recording is quite illuminating about the raw foundations which give rise to so much texture and detail when the Black Spirits come into play.

The most successful pieces on Nhava (which means "carrying bag, a metaphor related to the journey of life) are the ones which explore warm melodies without too much distraction. The opening "Ninipa has an instantly catchy appeal and a sunny embrace. "Pindirai suffers a bit from heavy production (cleaner tones would have worked much better). The next track virtually begs bodily motion—and I recommend giving in— just like "Tiregerereiwo and "Dzokai down the road. As we have come to expect from Oliver Mtukudzi, this is a fresh and vibrant mix, yet more evidence that his formula remains fertile, flexible, and true to its roots.

Note: This recording is licensed by Sheer Sound in South Africa.