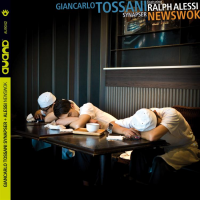 Wonders never cease. When Newswok first arrived in the mail, my first question was not "What the hell does 'Newswok' mean?" It was "Who is Giancarlo Tossani, and why is Ralph Alessi playing with him?" I was also alarmed that I had never heard of the record label, Auand Records, before. This despite the fact that the Auand catalog lists approximately 50 releases featuring dates led (or co- led) by the likes of Bill Frisell, Cuong Vu, David Binney, Steve Swallow, and Bobby Previte, plus a gaggle led by top Italian jazz artists. How could I have been so remiss?

Most jazz fans are familiar with Alessi, whose recent album Baida (ECM Records, 2013) made a bunch of "Best Of..." lists. He's also been a featured sideman with Steve Coleman, Don Byron and Ravi Coltrane. Musically, Ralph Alessi is about as heavy as they come. The credits on Newswok reveal that Tossani keeps fairly heavy company, himself. Saxophonist Achille Succi is a member of Fabio Delvo RASTPLATZ's excellent quartet, and drummer Christiano Calcagnile (who also plays something called the "drumtableguitar" on this album) is one of Europe's most in-demand percussionists.

As it turns out, Tossani is a really inventive and virtuosic pianist. His rather coy on-line bio suggests that he majored in philosophy in college, and studied jazz piano privately with Franco DAndrea, Mal Waldron, and John Taylor. Apparently, Tossani chose to concentrate on teaching and did not pursue a career in music performance at all until later in life. His first recordings, also with Synapser (very cool group name, by the way), appeared a decade or so ago, and Newswok is his fourth as a leader. As a pianist, he doesn't seem to take any stylistic cues from the usual suspects; Herbie Hancock, McCoy Tyner or Chick Corea. If anything, he's an iconoclast and free-thinker in the mold of Don Friedman, Ran Blake and Paul Bley, though he really doesn't sound like them either. His compositions bring together all sorts of unlikely sounds and influences, yet they are emphatically part of the jazz continuum.

The music on Newswok is complex and multi-sectioned without being too episodic. The contrasting sections of his pieces flow logically and seamlessly. As wild as some of his writing is, Tossani leaves a lot of room for solos which, in the hands of Succi, Alessi, and Tossani himself, are consistently great. A lot of demands are placed on the rhythm section, in terms of color, pacing and tempo. Calcagnile, who can swing like a madman or create clouds of sound tension like a Bertoia sculpture in a windstorm, and bassist Tito Mangialajo Rantzer handle all of it with relaxed, off-the-cuff ease. There's also quite a bit of collective improv scattered throughout, with some truly unexpected sounds coming from Calcagnile's drumtableguitar.

I still haven't figured out what Newswok means, or if it has any significance at all. It may well be a nonsense word. Giancarlo Tossani's music, by sharp contrast, seems to be anything but nonsense. Newswok is a whip-smart album that consistently deals with the unexpected in a soulful, sophisticated and playful manner.