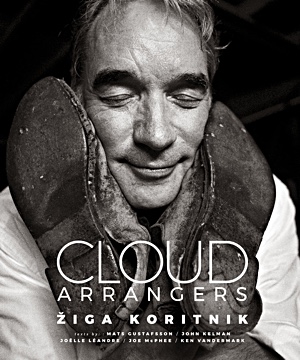 Music is something that profoundly defines Žiga Koritnik’s work. His photography expresses a deep passion for the performers while being aware of and showing respect to the entire musical scene.

Koritnik began to follow music over thirty years ago in 1986. Since then, Koritnik has produced more than 60 solo photo exhibitions all over the world, worked for several music festivals and taken more than 150 portraits of musicians.

Koritnik creates immortal images by employing, equally, both analogue and digital photography techniques. These techniques allow him to bring the music world closer, transcending music genres to tell the story of music to all.

The preface to Cloud Arrangers is penned by renowned All About Jazz scribe John Kelman, with the book also including enlightening texts from Mats Gustafsson, Joe McPhee, Ken Vandermark and Joëlle Léandre.

As always, with crowdfunding campaigns, Koritnik offers various degrees of participation for every budget, with everything from artist-signed postcards and autographed copies of the first edition of Cloud Arrangers, to a special signed slipcased edition, various-sized archival signed prints (pledger’s choice), and even an exhibition of Koritnik’s work.

Don’t wait: make your pledge in support of Cloud Arrangers today and, from levels beginning at just $79 (USD), grab yourself a limited first edition of this monumental book that deserves to place Koritnik in the same select group of music photographers including Jimmy Katz, Francis Wolff, Herman Leonard, Roberto Masotti and Dieter Rehm.

”In a time when cameras are more pervasive and invasive than they've ever been—with iPhones, iPads, Androids and low-price point-and- shoot devices lending the impression that everyone is a photographer—photo artists like Žiga Koritnik, paradoxically, stand out more than ever. Sure, anyone can take a picture, but to get to the heart of a subject and truly capture what it's all about requires much more than a camera and the opportunity to use it. It requires The Eye: one that sees things most don't, sometimes in the most seemingly mundane circumstances.

“Žiga Koritnik has The Eye. Capturing more than just the image in front of him, Koritnik's eye intuits those special moments in time to which we all aspire, but only rarely achieve. Anyone can, in time, take a good photo; only a precious few can create great photos, and only an even more rarefied handful can fashion a consolidated work of art that tells a story, as Koritnik has done with Cloud Arrangers.”—John Kelman, from the introduction to Cloud Arrangers