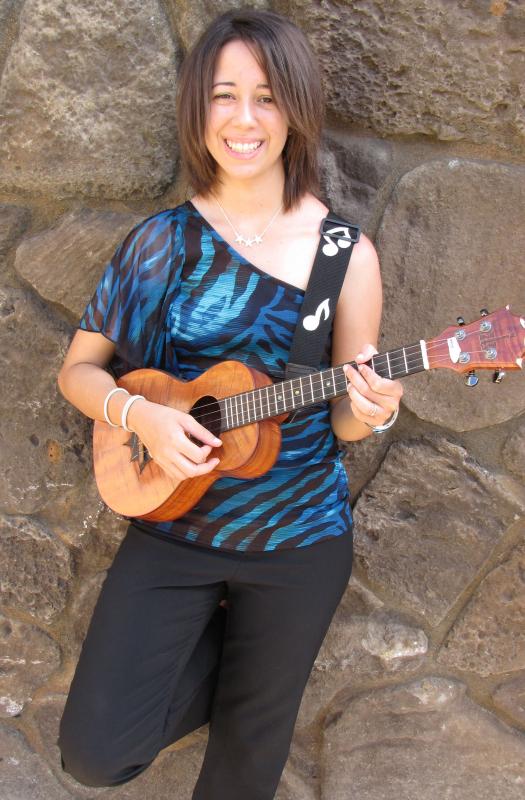 slideshow
At just 23 years of age, Brittni Paiva (pie-VAH) is the preeminent female ukelele player from Hawaii. This native of Hilo is an award-winning multi-instrumentalist with a prodigous gift who has been embraced by a global audience.

Her latest album, Tell U What (July 10 release, Brittni Paiva Music), showcases her true talent along side a group of highly respected musical legends – Michael McDonald, Tom Scott, and Arturo Sandoval. Scott produced the album, noting “we’ve put Brittni and her ukulele in a variety of new and different settings – Jazz, R&B, Pop, Funk, Reggae and even Classical. With the release of this CD, Brittni will have earned a place among the finest instrumental soloists of today.”

Featured tracks on the album include the Bela Fleck favorite “The Lochs of Dread,” Michael McDonald”s “I Keep Forgettin’,” and the Eddie Harris classic “Cold Duck Time.”

“Tom and I met in June 2011 at a jazz festival on the island of Lana'i here in Hawaii,” says Brittni. “I was already excited to be performing at the same event as Tom but when I was told that he wanted me to join him for a few songs during his set, I was ecstatic! Having the opportunity to perform with Tom was so much fun. We started recording while he was here in Hawaii end of November 2011 and then I flew to California in January 2012 to work with him in the studio. We then fine-tuned the pieces via email between his studio and mine.

“Doing this record was a great experience. I learned so much during this project and am truly blessed and very thankful. We’ve become great friends, and I am so thankful that he’s taken me under his wings and challenged me as a musician. I so longed for someone who could push me to the next level.

“I enjoy pushing the limits of the ukulele; playing genres and styles that most would never think could be played on an ukulele. I feel that the ukulele can keep up with its six-string cousin, the guitar.”

Tom Scott adds: “While performing in Hawaii last year, a young lady sat in with my band—on ukulele! Not exactly a common instrument in the jazz world! However, by the age of 22, Brittni Paiva had already made a name for herself locally with 4 self-produced CD's. The performance she gave that day on the uke was truly stunning! She had a keen melodic sense and rhythmic feel, exuding great confidence—and knew how to make that instrument 'sing' in a way I had never heard. She was a huge hit with the crowd—and I was totally hooked. From that point on, things progressed quickly. I wanted to feature her talents in a new setting—and corral some of my friends to help out. We recruited some of the best musicians on the planet—Michael McDonald, Arturo Sandoval, Ray Parker, Jr., and Chuck Findley—to appear as special guests. The result is something very unique. I am proud to have produced this project and, along with Brittni, hope it brings you as much joy as it has given us.”