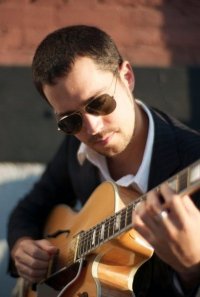 slideshow
A lesser talent than Israeli guitarist-composer Yotam might have gotten lost in this project.

It's not just that Brasil, issued last week by Jazz Legacy Production, features notable stateside jazz stars like Roy Hargrove, Claudio Roditi and Paquito D'Rivera, or even that he's updating familiar compositions by the likes of Antonio Carlos Jobim, or that he completed the sessions with a group of notable Brazilian heroes like drummer-percussionist Vanderlei Pereira, pianist David Feldman and guitarist Toninho Horta.

It's all of that.

Yet, Yotam Silberstein's gently assured six-string work rises above the distractions of big names and big songs, propelled by both passion and delicate sensitivity, by both musicality and technical facility. He not only matches Hargrove's flugelhorn, stride for stride on Jobim's lyrical “Falando de Amour," he adds interesting new shadings. (Hargrove also appears on updates Jobim's “Antigua" and “Eu te Amo," as well as Yotam's original “Nocturno"&#151a tribute to Brazilian composers that finds Yotam tangling pleasantly with Horta.) D'Rivera appears on clarinet for Dorival Caymmi's “Saudade Da Bahia," as well as on"O Barquinho," along with flugelhornist Roditi. Horta returns for a final touching duet with Yotam (one that underscores his underrated influence on the younger Yotam) on the album-closing “Samba da Minha Terra," also composed by Caymmi.

Again, though, it's Yotam—perhaps best known these days as a member of Monty Alexander's group, he's also toured with James Moody, Benny Golson, Frank Wess and the Dizzy Gillespie All-Star Band, among others—who I keep coming back to. Brasil is Yotam's fourth album as a leader, and his second for Jazz Legacy Productions following 2010's Resonance, but it somehow feels like his more deeply expressed, fully formed work to date.

On a house party of an album that could have provided a series of distractions away from Yotam's warm, free-flowing articulations—pleasant distractions, mind you; but distractions all the same—Brasil ends up being a tour de force for its hard-swinging host.