A marvelous piano trio outing. Taubenhouse has a restless sense of wonder on his own tunes, and a beautiful feel for the standards. And he's got crack trio-mates on board. He seems to know where he's going: where the music takes him.
&#151Dan McClenaghan, All About Jazz 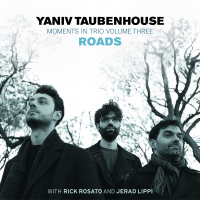 “Prayer" is a composition written by Yaniv Taubenhouse ASCAP.

“The meditative aspect of a prayer is the desired atmosphere in this composition. The sixteenth note subdivisions, which are implied in both piano and drums throughout the piece, provide a contrast to the long notes of the melody and help to set a feeling of continuity, often associated with a meditative state. This composition is not just about prayer itself, but a search for the right intention behind a prayer. The bass part underneath the melody becomes more and more involved in the second time the melody is presented which symbolizes the idea of repeating a prayer or a mantra while intensifying the meaning behind it.” —Yaniv Taubenhouse