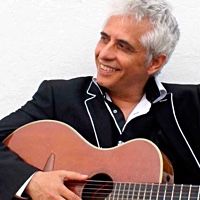 slideshow
Virtuoso and innovative spanish jazz guitarist Ximo Tebar will perform on May 24th at smalls jazz club accompanied by Donald Edwards, Jim Ridl and John Benitez. Creator of “Son Mediterráneo" style, Ximo Tebar is one of the most international Spanish musicians, with an impressive career, numerous awards, excellent recordings and performances in the most prestigious festivals around the world.

Soleo (Warner) is the title of his last album, with which he celebrates 25 years of discography, a research work on fusion and miscegenation of jazz and Mediterranean music. To round this anniversary a book is also on sale, 'Ximo Tébar: The Mediterranean Jazz Guitar', written by composer and doctor in musical research by Valencia University José Pruñonosa and edited by Piles (Editorial de Música SA), who makes an interesting study of his discography and his personal style of musical composition in his twenty-five year career in music.

It's been more than three decades since Ximo Tébar started directing his own groups. Since then, it has not ceased in the effort to star in a career that fits the evolution and endless illustrious companies. In them the organist of Philadelphia Lou Bennett is revealed as a fundamental pillar. Bennett introduced Ximo Tebar in France as a “new guitar talent", and the French magazine Jazz Magazine highlighted him as “Le jazzman espagnol des annèes 90, un improvisateur de aute volèe". And he was not wrong. From models such as Wes Montgomery, George Benson, Pat Martino and Grant Green, Tébar has developed a style that, in addition to serving as a support for many different albums, has also allowed him to share experiences with great and historic jazz names such as: Lou Donaldson, Benny Golson, Johnny Griffin, Joe Lovano, Dave Samuels, Joey DeFrancesco, Dr. Lonnie Smith, Louie Bellson, Anthony Jackson, Tom Harrell, Idris Muhammad, Arturo O'Farrill, Dave Schnitter, etc.

His music has been described as 'Mare Nostrum jazz', and, far from denying it, this Valencian guitarist has only confirmed the legitimacy of the label. Already in 1995 he released 'Son mediterráneo', with which he consolidated the pillars of his music. Tébar resides between Valencia and New York, and shares his tours, recordings, productions and master classes with the direction of his record label Omix Records. The musician is a counselor of the Consell Valencià de Cultura, the highest consultative cultural institution of Generalitat Valenciana Government.

A Polyfacetic And Transgressor Musician

His most personal, creative and innovative facet is heard in his fusion albums. Son Mediterráneo (Warner 1995) was his confirmation as composer and arranger, facet that not only applies successfully to his own compositions, also in the daring jazz standards versions he interprets. This album was awarded by World Music magazine as one of 100 best jazz albums of the '90s. Son Mediterráneo supposed that Tebar deservedly received the recognition of creator of a genre that fuses jazz and flamenco with a Mediterranean flavor. This sound can also be heard on albums: Aranzazu, Anis del Gnomo, Te Kiero con K, Homepage (nominated Best Jazz Album at 1999 Music Awards and the first Spanish jazz album to hit the radio hits), and Embrujado (2003).

In his more experimental, avant-garde and progressive facet, his albums Eclipse (2006) and Steps (2008) have been highly rated in Downbeat, JazzTimes, All Music, etc., and one of best albums of the year by All About Jazz. Also Celebrating Erik Satie (2009) is a experimental work based on music of the great French composer Erik Satie, with transgressive arrangements in the key of jazz, free jazz and contemporary flamenco.