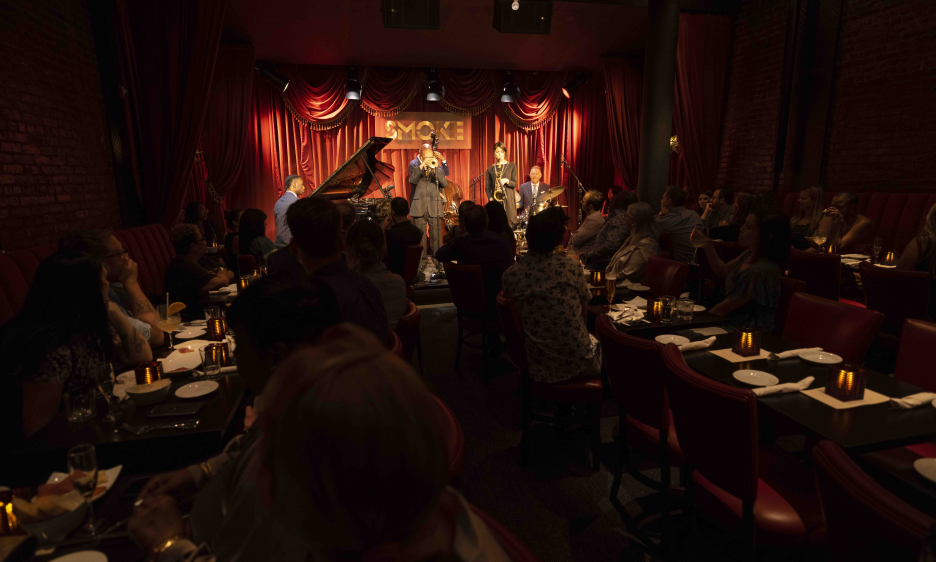 Hailed by The New Yorker, as “the standout vibraphonist of his generation,” Stefon Harris rolls into SMOKE for a multi-night stand with his razor-sharp quintet, Blackout. Heralded as “one of the most important artists in jazz” by The Los Angeles Times, four-time Grammy nominated Harris leads a magnificent group of young musicians who are not afraid to include rock, funk, fusion and pop elements into their arrangements. When DownBeat’s John Murph attended the group’s Kennedy Center concert in D.C. in 2018, he heard “an exploratory, tightly focused set that placed high stakes on rhythmic agility, communica­tive alertness and spontaneous invention…Each member admirably held their own next to Harris, whose virtuosic and imaginative improvisations can certainly prove unnerving for lesser talents.”

SMOKE is thrilled to welcome two of today’s leading six-stringers: Peter Bernstein and Kurt Rosenwinkel (marking his SMOKE debut). Universally respected amongst his contemporaries, Peter Bernstein has been a vital part of the New York jazz scene, as well as overseas, since 1989. Bernstein’s deep swinging feel and connection with the tradition, in tandem with his effortlessly forward-thinking approach to improvising are key aspects of his sound, and have seen him rise to prominence as one of the pillars of the contemporary jazz guitar scene. Bernstein is perhaps best known for his long-standing organ trio with Larry Goldings and Bill Stewart, which established its rapport on a weekly gig at SMOKE beginning in 1989. Their latest album Perpetual Pendulum was released in March 2022 on the venue’s label, SMOKE Sessions Records.

Composer, multi-instrumentalist, bandleader, and producer Kurt Rosenwinkel is one of the most celebrated musical voices in jazz and is widely renowned as one of the most distinctive and gifted guitarists to have ever played the instrument. According to the Observer, he “has been one of the most important jazz guitarists in the game for the last quarter-century.”

Bernstein plays with a hard-driving post-bop flair, his approach makes for an interesting counterpoint to Rosenwinkel’s more introspective style. These two seldom work together onstage. “I love the sound of two guitarists in a group," Rosenwinkel said. “If there’s a chemistry there, it can be a great sound."

As a vocalist both bold and subtle, Lezlie Harrison’s vulnerability attends to the fragile matters of our collective human affairs while her optimistic momentum inspires us to rise above any tribulation to rejoice. Be it Jazz, Blues, Gospel, Soul, The American Song Form, original compositions, or any song in ANY form, Ms. Harrison will imbue it with her distinctive stamp and make a very personal delivery. On the planet's premier jazz radio station, WBGO, her voice as a regular curator and presenter reveal the love and pride with which she regards America's classical music. Hyper-active on the New York and global jazz scenes, Lezlie is also, along with the late Dale Fitzgerald and trumpeter Roy Hargrove, a member of the triumvirate responsible for launching New York's world-renowned JAZZ GALLERY. On occasion Lezlie lends her regal presence to the stage as an actress, bringing to those endeavors, the same sense of organic elegance that she brought to the runways and photo studios of Paris some years ago. By way of her childhood in New York and North Carolina or her maturation in New York, Boston or on stages throughout Asia, Russia, Europe, and elsewhere, Ms. Lezlie Harrison shows aesthetic evidence that she is a recipient of the lessons of dignity, integrity, and grace bestowed upon her by her elders and fine-tuned by her own history

“Like his old-school contemporaries Jimmy Cobb and Mickey Roker, drummer Louis Hayes elevates the music from within, using finesse and hip nuance rather than playing on top of it with overt chops.” – Jazz Times

Born and raised in Detroit, in 1956 Louis Hayes moved to New York to replace Art Taylor in the Horace Silver Quintet; he recorded five Blue Note albums with Silver before joining Cannonball Adderley in 1959 for a six–year stint. Reviewing his 2017 album Serenade For Horace in All About Jazz, Victor Schermer noted that “at 80, Hayes’ drumming is as superb and as youthful as ever.” The drummer’s legendary career included extended stays with the groups of Oscar Peterson and McCoy Tyner as well as co–leadership of the Cannonball Legacy Band (with saxophonist Vincent Herring). As a bandleader in his own right, Hayes surrounds himself with an abundance of talent in alto-sax burner Vincent Herring, rising star trumpeter Jeremy Pelt, bassist David Williams and pianist Rick Germanson. Don’t miss this special engagement by one of the great masters of the music, Louis Hayes!

“Thirty years old and one of the finest piano players to emerge in decades,” says All About Jazz. Emmet Cohen, a jazz sensation, has over 93K subscribers on YouTube and 70K+ followers on Facebook. He has accompanied numerous jazz luminaries and plays with the command of a seasoned veteran. Downbeat observed that his “nimble touch, measured stride and warm harmonic vocabulary indicate he’s above any convoluted technical showmanship.”

His quartet is one of the hottest young quartets in jazz today and melds all styles of jazz, stride, swing, bebop, free, and contemporary with an emphasis on the Great American Songbook.

In-Person $25-$60. Livestream $15. For more information and to make reservations visit our website (link below).