Women In Jazz: New Book celebrates the women of music, shares their journeys and gives them voice.

From Sammy Stein, an author already familiar to many music readers, comes Women In Jazz. Written around interviews with over 40 women from all areas of jazz including stellar musicians, composers, photographers, radio hosts and more. 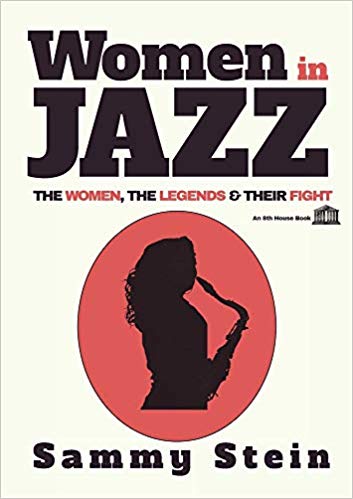 slideshow
Containing interviews and first-hand accounts, Women In Jazz is witness to the generosity, profundity and positivity with which women have responded and the energy they have put into their lives in overcoming challenges. The book tells the stories of the women in their own, unchanged words. It allows their voices to be heard and tackles head-on some issues which need to be discussed such as misogyny and there are some hilarious anecdotes, some poignant moments but above all a positivity from these women whose passion for music helps keeps it well and truly alive.

Musicians include Jane Ira Bloom, Jane Bunnett, Ruby Turner, Terri Lynne Carrington, Barb Jungr, Tina May, Camille Thurman and many more. Stein includes label managers, composers, arrangers as well as the musicians and vocalists. Their words are uncut, spoken from the heart and tell of their journey and their passion for one of music's most cherished genres.

The reader is left in no doubt of Sammy’s knowledge and authority on the subject, yet she manages to tackle a challenging topic in a direct, passionate and sincere, yet easily digestible way. The sheer volume and status of the people who have given up their time to help Sammy, both women and men, is testament to the respect Sammy has earned across the industry and the trust people have in her to relay their stories faithfully." —Darren Harper, Jazz Matters

“A fascinating insight into the lives of contemporary jazz women and one that will be read with great interest by jazz enthusiasts of any gender. It really is an intelligent, insightful and consistently entertaining read, a book that either be read from cover to cover or dipped into at random. Even the most casual perusal of the work is guaranteed to unearth a nugget that will intrigue, inform and entertain". —Ian Mann, Jazzmann reviews

“One eye-opening narrative leads to a fascinating historical photo that leads to priceless quotes and offbeat reference sources, keeping the reader hungry for the next surprise Stein will veer off to". —Debbie Burke, jazz critic.

“In her own inimitable way, Sammy Stein has given us a work that will be read, pored over and discussed for quite some time." —Nick Lea, Jazzviews

All That’s Jazz author Sammy Stein’s new book Women in Jazz: The Women, the Legends & Their Fight uses a wide-angle lens to look at how women in a range of different roles have made a life in—and helped shape—jazz. Instead of only focusing on well-known performers, Stein interviewed agents, arrangers, composers, public relations professionals, media members, and more. Her subjects bridge generations (and international boundaries) in an effort to honor the past, assess the present, and point to the future. (The book was picked by Gearhead: Stocking Stuff of Legend and awarded a distaff notation.) —Emile Manasche, Jazz Times

The book has 5-star Amazon reviews on amazon.com. It even has YouTube videos and podcasts made about it by musicians, such is Sammy's popularity.

Sammy Stein is a popular reviewer, author and columnist. Writing for three major columns, she brings her own detailed take to reviews, interviews and writing. Her contacts within the music industry are phenomenal and she has been described as the “go to" reviewer for musicians. She has reviewed music by Sting, David Bowie, Thelonious Monk, John Coltrane, Binker and Moses and of course many, many jazz musicians. Her book , All That's Jazz (Tomahawk Press 2017) received critical acclaim. She has curated several radio series, been on Jazz FM, BBC, Jazz Bites Radio and more. Sammy organised the London Jazz Platform mini-festival and co-hosts series on US radio.

Women in Jazz: The Women, The Legends & Their Fight is available now from Amazon, Foyles, Waterstones and all major book retailers. Publisher: 8th House ( Ontario and New York)