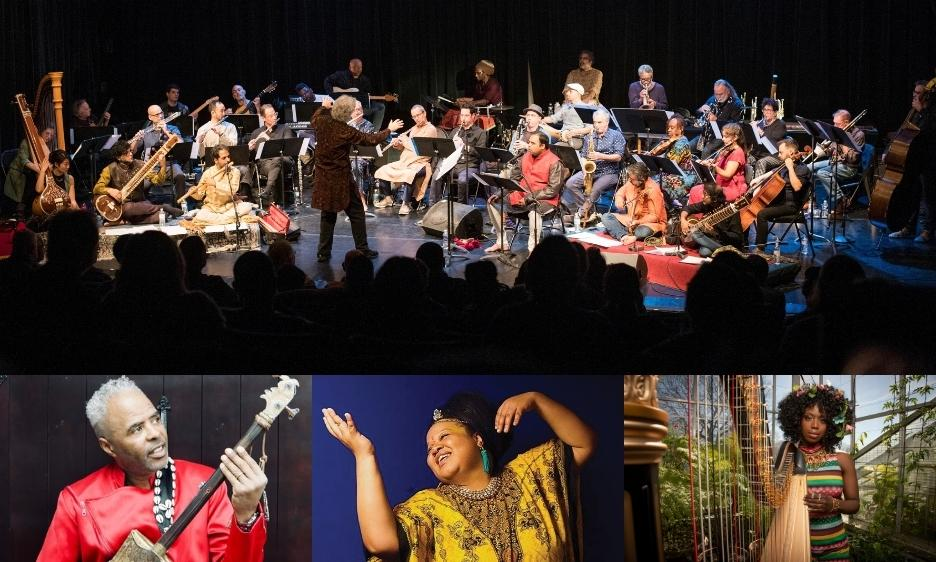 I was thrilled when WMI approached me about reviving the Improvisations series... but I didn’t want to do a rehash of what we did before. I wanted to reflect what’s happening now.
&#151Adam Rudolph

With a 37-year curatorial presence in NYC, World Music Institute is mainly known for presenting traditional and contemporary music from around the world. However, in the early years, WMI's programming included the 'Improvisations'series, rooted at the intersection of NYC's jazz and improvised music scene and the music of our immigrant communities. The series brought together musicians from various backgrounds and cultures, including such visionary artists as Don Cherry, Yusef Lateef, Randy Weston, Hassan Hakmoun, Glen Velez, Foday Musa Suso, and Yaya Diallo. Many of these artists had never performed together before, and the series gave them an opportunity to improvise and collaborate. This exciting, multi-artist launch event demonstrates and celebrates the lasting value and relevance of WMI’s artistic vision of Many Cultures – One World.

A core member of many of these original dates was composer, percussionist, and often acting Musical Director Adam Rudolph who has been hailed as “a pioneer in world music” by The New York Times and “a master percussionist” by Musician Magazine. Rudolph performed on over a dozen of these ‘Improvisations’ shows, many of which led to life-long musical relationships including with Yusef Lateef, Hassan Hakmoun, and Don Cherry, among others. Adam’s later projects, Adam Rudolph's Moving Pictures and Go: Organic Orchestra (featured at this event) were partly inspired by the unique Improvisation collaborations that he experienced at these WMI shows. On September 10th, Adam Rudolph reboots the ‘Improvisations’ series with an impressive lineup of musicians from many different backgrounds and musical influences.

“I was thrilled when WMI approached me about reviving the Improvisations series,” says Rudolph. But I didn’t want to do a rehash of what we did before. I wanted to reflect what’s happening now. How do we create community when we’re all living in different neighborhoods? How do we share the same sense of love, creativity, and exploration that’s the glue of the Go: Organic Orchestra? Live performance is the key. Regathering in Central Park, sharing that creative moment as a community is where the magic happens.”

The event will include old friends and veterans of the series, including NEA Jazz Master saxophonist Dave Liebman and Moroccan gnawa master Hassan Hakmoun, as well as a new crop of younger artists, including Brooklyn Raga Massive, Joel Ross, Brandee Younger, and Angel Bat Dawid (who pulls double duty as the evening’s DJ).

“My experience of the original series was about being open to the creative transmissions from older artists to us in the younger generations”, Rudolph adds. “In the context of Black Atlantic arts, creative approaches were shared and passed down from mentors like Yusef Lateef and Don Cherry. It is an oral tradition; sharing and passing along what has been given to us helps keep that chain of transmission alive.”

The evening will also include Rudolph and Hassan Hakmoun performing in tribute to legendary jazz trumpeter and composer Don Cherry. Cherry performed in and illuminated many of the Improvisations shows; and recorded on Rudolph and Hakmoun's 1988 Gift of the Gnawa project that WMI also hosted as part of the original Improvisations series.

“We are thrilled that our new Artistic Director Brice Rosenbloom proposed to start his first season with this ambitious and artistically exciting launch event," says Gaby Sappington, WMI Executive Director. “It's the perfect way to recognize and celebrate WMI's history of bringing artists and people of a variety of backgrounds together at one of New York City's most exciting spots—SummerStage in Central Park."

This program is supported as part of Con Edison’s Arts Al Fresco series. “We are pleased to include World Music Institute’s performance of Adam Rudolph’s Go: Organic Orchestra in the Con Edison Arts Al Fresco series this fall,” said Jen Hensley, Senior Vice President, Con Edison Corporate Affairs. “As a longstanding supporter of the arts, we continue to look for ways to bring a wide variety of arts and cultural experiences to New Yorkers free of charge.”