...Framed on the artists' striking intuitiveness and deterministic interplay...
—Glenn Astarita, All About Jazz 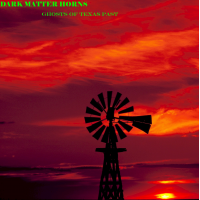 slideshow
Willie Oteri and Dark Matter Horns dig into their archives for upcoming album Ghosts of Texas Past.

The new album features tracks taken from rehearsals recorded in 2018 in Austin Texas with Willie Oteri (tenor sax and flute), Dave Laczko (trumpet and effects) and Steve Mankenberg (drums) in a totally improvised environment, recorded with minimal equipment on 2 to 4 tracks.

A decades long relationship between Oteri and Laczko produced several releases with Oteri jumping from guitar on WD-41 recordings to sax and flute on the Dark Matter Horns releases. The interaction between Oteri and Laczko is very natural and inventive which is apparent on previous WD-41 and Dark Matter Horns recordings. These recordings have earned several favorable reviews and a number 3 spot in Guitar Player Magazine Editors Picks in 2010 for the album Temi Per Cinema.

The new album will likely be the last release of recordings made in Texas as Oteri has recently relocated to the East Coast where he has produced recordings with guitarist Jeff Platz, drummer Matt Crane, bassist Damon Smith, and others. Oteri's adventurous past includes work with names like Tony Levin, J.A. Deane, Scott Amendola, Ronan Chris Murphy, Brannen Temple, Ephraim Owens and a ten year run of performances at Kenny Dorham's Backyard in Austin.

“Initially Oteri offers a more languid approach that creates mood, something rather lacking among this column's CDs, with their in-yer-face anxiety to please.” —Stuart Nicholson, JazzTimes

“...known for pushing the envelope within progressive rock and avant, jazz fusion circles, assertively manifesting these exploratory processes... framed on the artists' striking intuitiveness and deterministic interplay...” —Glenn Astarita, All About Jazz