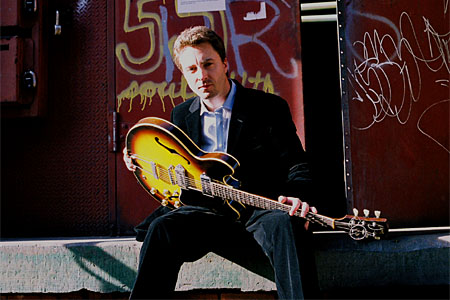 Hailed as a “hidden gem,” Willem Sellenraad has earned a fast growing reputation of being at the forefront of a new generation of jazz musicians. Known for his brilliant solos and innovative improvisations, this New York City native melds the various styles, phrasings and concepts of the jazz idiom with the raw elements of soul, rock and funk, to create a sound that is unparalleled.

The son of prominent New York artists, Will Sellenraad was destined towards music at an early age. Raised and immersed in the City's downtown art and music culture, Will was able to focus all his energies and talent toward the guitar by the young age of fifteen. After being awarded numerous scholarships, Will graduated from the New School University Jazz Program, where he studied under many jazz giants including John Abercrombie, Gary Dial, Jim Hall and Reggie Workman.

In the mid-1990's, Will Sellenraad landed the house gig at Visiones, one of New York's finest jazz clubs. At Visiones, Will developed a great musical kinship with fellow native New Yorker Eric McPherson and Kiyoshi Kitagawa. This great musical rapport led to the 1998 recording of Willem's critically acclaimed debut album, Streams, which features a special appearance by Blue Note recording artist James Hurt.

In 2002, Will recorded Star Hustler with his band Root Down, featuring Brian Charette on organ and Darren Beckett, of Ambulance Ltd., on drums. This album, which embraces the spirit of the great organ trios of the 1960s, creates compositions that Victor Lewis has hailed as “fresh… and taken with spontaneity.” Incorporating elements of soul jazz through to the Meters, Soulive and beyond, Star Hustler is truly music for all audiences.

A recipient of several grants from the New York State Council on the Arts, Willem is a mainstay on the music scene in and around New York City, regularly headlining at Detour in the East Village and playing at storied Jazz rooms such as Birdland, Bradley's, Iridium and Sweet Basil. As a band leader, he has performed at the Panasonic Village and JVC Jazz Festivals in New York and the Discover Jazz Festival in Burlington Vermont.

In 2006, Willem heads back to the recording studio to record his much anticipated third album, which will feature renowned saxophonist Abraham Burton, internationally acclaimed bassist Kiyoshi Kitagawa and legendary drummer Victor Lewis. Without a doubt, this album promises to be an extraordinary showcase for this rising talent.