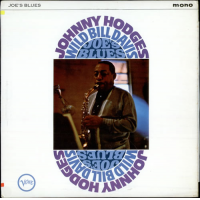 slideshow
Before Jimmy Smith, Shirley Scott, Big John Patton, Jimmy McGriff, Brother Jack McDuff, Groove Holmes and all the other organists you know, there was Wild Bill Davis. Born in Missouri, Davis started his recording career in 1945 as organist and arranger for Louis Jordan and His Tympani Five, one of the leading pioneers of rhythm and blues. When Davis left Jordan in 1951, he led a trio and began recording for Okeh. Perhaps his best known recording today is April in Paris in 1953. Davis was supposed to record the song with Count Basie's Orchestra in 1955 for Verve, but when he couldn't make it, Basie used Davis's arrangement for his big band and had a huge hit with the recording. Duke Ellington also favored Davis, recording with him for the first time in 1951.

It's tough to pick a favorite, but a contender would be Joe's Blues (Verve). The band featured Lawrence Brown (tb), Johnny Hodges (as), Wild Bill Davis (org), Grant Green (g), Bob Bushnell and Bob Cranshaw (b) and Grady Tate (d). The addition here of Brown and Green binds the high tone of Hodges' alto sax to Davis's wide, swinging organ, and you can hear them feeding off of each other as songs progress.

There's a solid lineup of Strayhorn and Ellington compositions (four in all) as well as standards and several soulful blues. Most of all, Davis's organ is so unbelievably tasty. Unlike other players, he used the instrument like a big band—creating sections on the keyboard that deliver a call and response, hooks, riffs and all the tricks of bands in the swing and R&B eras. If you love the organ, this is the place to start.