Who Were the Kim Loo Sisters? 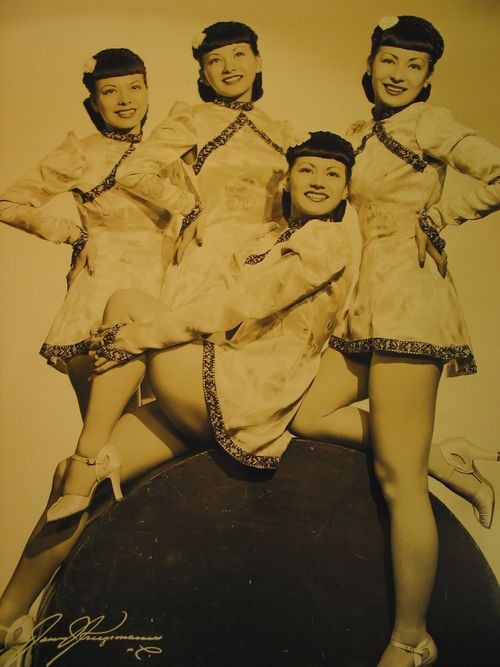 The Andrews Sisters were from Minneapolis. So were the Kim Loo Sisters (above). In all probability, you've heard of the former but not the latter. For every headliner in the late 1930s and '40s, there were dozens if not hundreds of artists who didn't become huge. Reasons vary, ranging from bad breaks or lacking that little something extra. In the case of the Kim Loo Sisters, that variable was less about talent and charm (wait until you see the following video) and more about not connecting with someone who could transform them into a brand. It's also easy to imagine that opportunities during World War II became more scarce for all Asian-American entertainers after Pearl Harbor.

But that's all in the past. The beauty is we're now just starting to get to known them, thanks to director Leslie Li, daughter of Jenée, one of Kimmies. Leslie and editor Harry Keramidas have completed a documentary on the Kim Loo Sisters but now need your help to pay the licensing fees so that they can use the songs the Kimmies sing in footage. Before I go further, here's the documentary's trailer, which is insanely addictive...

Go here to the IndieGoGo fund-raising site to learn more and donate.

Fortunately, I was able to catch up with Leslie last week to talk about her mom and aunts, also known as the Kim Loo Sisters...

JazzWax: Who were the Kim Loo Sisters and how did they get started as a vocal group?

Leslie Li: The Kim Loo Sisters—Alice, Maggie, Jenée, and Bubbles—were a Chinese-American jazz vocal quartet popular in the 1930s and '40s and the first Asian-American act to star in Broadway musical revues. They were the daughters of a Polish dressmaker and what was known then as a Chinese “paper son"—their father was born in China but purchased falsified identity papers to stay in the U.S.

JW: Where were the Kimmies born and raised?

LL: In Minneapolis. They didn't have voice training, but took dance lessons from a very young age. They were actually in the same classes as the Andrews Sisters. They were discovered in 1925 and quickly began performing in kiddie revues in and around Minneapolis. Soon they moved on to playing vaudeville circuits around the country and fulfilled their mother's dream by eventually appearing on Broadway and in film. As they gained popularity, the Kimmies moved their base of operations to Chicago and finally to New York.

JW: How did they sing so well without training?

LL: All the Kimmies were naturally talented musically. Their father, Shear Gim, built them a radio, the first in the neighborhood. As young girls, they sang and danced to music broadcasts. In 1925, George White and his Orchestra performed in Minneapolis over the Christmas holidays and sent out a casting call for talented local children. Lena, the Kimmies' mother, hoped Mr. White would take at least one of her children. Mr. White took them all. It was their first paying job. Although George White taught the Kimmies the ropes, he wasn't really a mentor. They honed their skills on the vaudeville circuit as teenagers, and ended up performing with a number of big bands, including Ina Ray Hutton and Her Orchestra and the Milt Britton Orchestra.

JW: Where did they perform mostly at first?

LL: As children, they performed locally in Minnesota as a family act called Louie's Chinese Revue. Their mother, who was their manager, chaperone, costume designer and dressmaker, also was part of the act. In their teenage years during the 1930s, their mother dropped out of the act and chose Chicago as their base of operations. From Chicago, they followed the various Western and Mid-Western vaudeville circuits. At that point, Bubbles was still underage. Because of child-labor laws, they couldn't perform in more prestigious, better-paying law-abiding theaters in the East. By 1939, they wound up on Broadway, where they performed in George White's Scandals at the Alvin Theatre. Later, they performed at such New York venues as the Strand, the Palace, the Paramount, Loew's State, the Capitol, the Edison Hotel and the Astor Hotel.

JW: Why didn’t they record?

LL: From what my Auntie Alice, the oldest of the Kim Loo Sisters, told me, RCA asked them to record at one point, but that the recording ban kept them out of the studio. Of course, that may just have been what they were told. The ban didn't affect vocalists, only musicians, and many labels were back in operation by 1943. Only Columbia and RCA held out for another year. In 1944, they joined the U.S.O. and shipped out for the Mediterranean to perform for Allied forces stationed in Europe.

JW: Then what happened?

LL: Life took over. After they returned to the States, the Kim Loo Sisters broke up as a musical group. My mother, Jenée, decided to get married right after the road show of George White's Scandals, so she left the act quite early. Alice, Maggie and Bubbles continued as the three Kim Loo Sisters. But in 1945, after they returned from their tour of duty in Europe, Maggie left the act, too. She had married Dan Kenyon, a trumpeter in the Milt Britton Orchestra, before she shipped out and wanted to rejoin her husband. The two remaining Kimmies—Bubbles and Alice—tried to find a female vocalist to replace Maggie, but it never worked out. It was impossible to replace a sister in a sister act. Soon afterward, Alice and Bubbles married. Alice married the guitarist in Ina Ray Hutton's Orchestra while Bubbles married the band's male vocalist. Marriage may have ended the Kim Loo Sisters' act, but marriage didn't fracture the sisters' close relationship. All remained the closest of kin all their lives.

JW: Do we have any film of their act?

LL: Yes, two soundies—three-minute musical films—have survived. We can see and hear them sing Take Me Out to the Ball Game and Gee, the Jeep Jumps. They also sang in the 1944 Hollywood feature film Meet Miss Bobby Socks, with Louis Jordan.

JW: Are the Kimmies still with us?

JW: Are there any recordings of the Kimmies on tape?

LL: Yes. We have recordings made on a tapedeck and Presto machine. Some were made in rehearsal in Leon Carr's studio, some were made backstage after a performance while others were taped off the radio by their father while they were with Ina Ray Hutton. Hopefully we'll raise the money we need to licenses to these songs so we can finish the film and screen it publicly. After all, we couldn't make a film about the Kim Loo Sisters without them singing their songs.

JazzWax note: Go here to learn more about the Kim Loo Sisters and donate if you're able. You'll fall in love with them almost instantly.