Who Was Eddie Fisher? 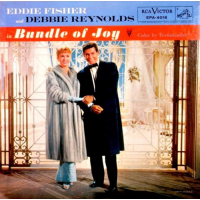 With the stunning deaths this week of Carrie Fisher on Dec. 27 and her mother, Debbie Reynolds, the following day, the media has been awash in articles on Star Wars, cocaine abuse, extra-marital affairs on the set of Star Wars, depression, Singin' in the Rain, Tammy and the Bachelor, drinking, Elizabeth Taylor and whether a mother can die of a broken heart one day after the death of her daughter. All but forgotten in this frenzy is Eddie Fisher, the former husband of Reynolds and the father of Carrie Fisher.

Who was Eddie Fisher, why was he special and how bright a light was he in the pop galaxy? To most people unfamiliar with his recording career, Fisher was a merely some singer who married Debbie Reynolds in 1955 and ran off with the couple's best friend, Elizabeth Taylor, in 1958. But if we table the tabloid stuff and just focus on Fisher's singing career, you'll find that he was a superstar and one of the most successful pop singers in the pre-Elvis 1950s. Between 1950 and the end of '55, Fisher had 47 charted pop hits. Not easy to do, considering Nat King Cole had 45 and Tony Bennett had 20 during the same period.

While it may be hard to understand how a full-bore traditional crooner like Fisher could become cat-nip for millions of female record buyers while catching the eye of female movie stars, we'll need the historic context in place and well as clips to sort this out. In short, Fisher's success was hardly an accident, and he was every bit a vocal heavyweight and dazzling charmer.

Born in Philadelphia in 1928, Fisher showed early promise as a singer. His first broadcast appearance was on WFIL-AM in Philadelphia, and he eventually performed on Arthur Godfrey's Talent Scouts radio broadcast. In 1946, when he was 18, Fisher dropped out of high school in his senior year to become a professional big-band singer. By 1949, while in New York's Catskill Mountains singing at Grossinger's Resort, he was discovered by singer-comedian Eddie Cantor, who put him on his radio show. Fisher was quickly signed by RCA in 1950.

Those are the bare biographical bones. Interestingly, his big formal vocal sound derived not from the casual style of Bing Crosby or Frank Sinatra but from Al Jolson, a family favorite. Which is probably what caught Cantor's ear. Fisher also was strikingly handsome, relaxed and naturally affable in his early 20s. Viewing videos of him back in the early 1950s, you find a perfect-pitch singer who made it look like a snap put others at ease. Girls who Fisher somehow missed with his seductive voice were hooked on his smile and the crinkle in the corners of his eyes. In 1951, Fisher went into the Army and sang for the troops in Korea and Europe until his discharge in 1953. Then his career and fame exploded.

The reason for his mass appeal, in a word, was television. Fisher had a perfectly wonderful voice, albeit one you'd more likely find in a male lead on a Broadway stage. But as television sets became affordable for an expanding number of households, Fisher, unlike earlier crooners, had a connection with female viewers. Part of his appeal was a full head of hair, making him matinee-idol material. But he also carried himself well and seemed to have an emotional transparency that others did not. Nothing was an act. What you saw and heard was who he was.

But TV alone didn't make Fisher a star. Several other events helped set the gears in motion. One was the public's acceptance of the vinyl 45 and 10-inch long-playing albums. The new formats made pop singers hot properties starting in 1952. Where vocalists had once been sandwiched briefly between stretches of instrumental music, the tables had turned by the early 1950s, when singers became the center of attention on jukeboxes and turntables.

Even more important than television and convenient recording formats was the virtual absence of Frank Sinatra. The singer's popularity plummeted in the early 1950s as Columbia bungled his career, packaging him no differently than it had in the late 1940s, except for the addition of creepy novelty tunes. By the end of 1952, he had hit commercial bottom and the label dropped him. It would be a year before Sinatra staged a comeback—not on records but in the movies.

Fisher was able to exploit the vacuum. If Sinatra's vocal personality then was that of a confused and bruised romantic in need of female mothering, Fisher was seemingly more confident and free of emotional baggage. There was something about his voice that made girls and young women feel safe to dream.

At the dawn of the '50s, during this unique period of male emotionalism in pop, Fisher and a handful of other new singers were dubbed “criers"—those who sang as if they were about to break down in tears. As reflected by record sales, girls seemed to like it that way. This group included Johnnie Ray, Frankie Laine and even Tony Bennett (I Won't Cry Anymore), whose sound early on clearly was Columbia's answer to RCA's Fisher.

A careful listen to Fisher's recordings in the early '50s and beyond reveals an excellent lyric baritone with a throbbing feel who wasn't in the business of transfixing female fans as much as providing them with a courteous male prototype with characteristics they'd want in their own boyfriends. In this regard, Fisher was what we call a “new male" who redefines masculinity. Sinatra had done the same in the mid-1940s, but by the early '50s, his audience had outgrown him. What would save Sinatra's career in 1954 was his ability to re-purpose swing at Capitol as a finger-snapping soundtrack to celebrate mid-life virility. But that would come later.

Here's Fisher's third No. 1 hit, in 1954, I Need You Now, performed at the Hollywood Bowl that year. By then, Sinatra had outgrown his young audience and was being repositioned in the LP era for young adults. Fisher, by contrast, had a more relaxed, youthful confidence untouched by the Depression or World War II...

Here's Fisher with Louis Armstrong at the Hollywood Bowl in 1954. He wasn't as loose or as improvisational as Sinatra, but Fisher had soul (move the time bar up to 4:29 if you want the duet)...

Here's Fisher with Reynolds on What's My Line? in 1956. Strangely, Fisher is more relaxed and camera-friendly than Reynolds. Also, notice what Fisher says at the end: “I always cry." Sensitivity as a badge of honor, which marked a dramatic change in the persona of pop stars (move the time bar to 15:15)...

Fisher's career continued for some years. Here's Fisher with Dean Martin in 1966, who clearly had enormous respect for his voice and confidence...

And finally, to crystalize all I've said above, here's a fascinating TV segment from 1953, when Sinatra was at rock bottom and desperately in need of TV exposure. It offers a stylistic evolution of the crooner, from Rudy Vallee (1920s) to Bing Crosby (1930s), to Frank Sinatra (1940s) and Eddie Fisher (1950s)...