Who Knows? At the Yippie Museum Cafe in Greenwich Village 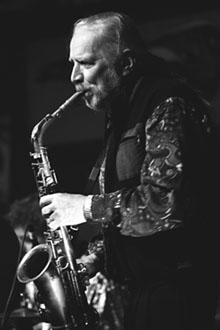 slideshow
Music that flows from Jerry Garcia, Woody Guthrie, Gunter Hampel, Sonny Rollins and beyond, to join up in the delta of Who Knows? Appearing at the comfortable Yippie Museum Cafe at 9 Bleecker Street in Greenwich Village on Saturday, January 30 at 8PM, Who Knows? is a special blend of guitarist/vocalist Richie Nagan, alto saxophonist Mark Whitecage, and clarinetist Perry Robinson. There is no admission charge for the two-set evening.

The music surges and eddies, taking surprising and sometimes sudden turns that can soften the sound to a whisper or raise it to a roar. Guitarist/vocalist Richie Nagan's songs originate from his long-time study and love of the Grateful Dead, while his many performances with George Clinton's Parliament Funkadelic and Detroit drummer Muruga's more free-form bands add other dimensions.