Where's The Beat? From Ancient Rhythms To Future Grooves For Gizmos, Gadgets And Thingamajigs 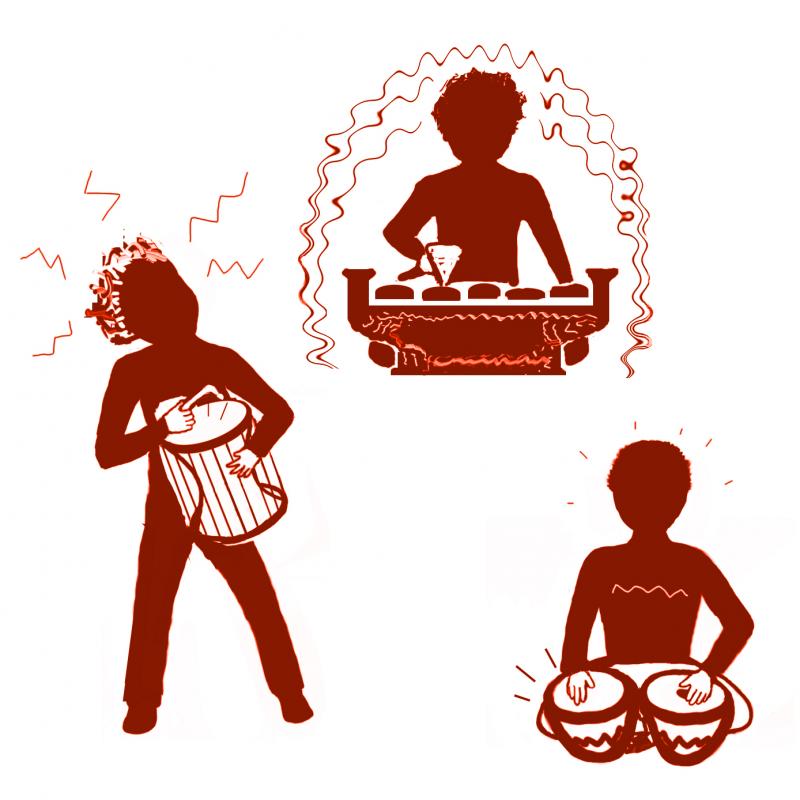 slideshow
The classic “world beat bible" by Matthew Montfort is now bringing these ancient rhythms into the grooves of the future with content for digital audio workstations, sequencers, computers, tablets, smartphones, CD players, and other gizmos!

﻿A. West Africa, Bali, and India, birthplaces of polyrhythm, gamelan, and tala.
B. Within every performer, where musical dreams are made.
C. In a rhythm training manual by Matthew Montfort called Ancient Traditions – Future Possibilities.
D. In the new companion set Ancient Traditions – Future Possibilities: Audio Guide and MIDI Groove Tracks from the Traditions of Africa, Bali, and India.
E. Through world rhythm workshops and Skype study.
F. All of the above.

﻿If you answered “all of the above," you are well on your way to finding the beat! Read on to find out how a training manual on the rhythms of Africa, Bali and India can help performers reach their musical dreams and is now bringing these ancient rhythms into the grooves of the future with the release of an audio companion edition for digital audio workstations, sequencers, computers, smartphones, CD players and other gizmos!

The Beginning, the Beat, the Book

This classic “world beat bible" by Matthew Montfort takes the student on a musical voyage through the ancient rhythmic traditions of Africa, Bali, and India with a series of exercises that require no instruments to perform. Interesting, imaginative and fun, these rhythm exercises will be of immense help to all music lovers, not just percussionists. Indeed, Matthew Montfort, leader of the trailblazing world fusion music group, Ancient Future, was inspired to write the book because it was difficult for him to find musicians who had the skills to perform multi-cultural music. African polyrhythms, Balinese kotèkan and Indian classical music were chosen as the source material for the training because these three traditions in combination cover the major types of rhythmic organization used in most of the world's music. By enabling home study of these non-Western rhythms with enough material for years of practice for most students, the training develops refined rhythmic skills, promotes multi-cultural musicianship, stimulates new ideas for composers and improvisers, and fosters cross- cultural music appreciation.

The New Guides and Grooves

A new downloadable companion set of MP3 audio guide and MIDI groove tracks of the exercises in the book Ancient Traditions – Future Possibilities will be released in fall 2017. The preview beta release is on sale now at Ancient-Future.Com. The downloads are set up for playback on Mac and PC computers, tablets, and smartphones. The tracks are also available on a CD/CD-ROM set. The material is presented in two complimentary formats: audio guide tracks and MIDI groove tracks.

Ancient Rhythms – Future Grooves: MIDI Percussion Groove Tracks from the Traditions of Africa, Bali, and India is a complete set of 128 MIDI tracks that playback in Standard MIDI File compatible web browsers. For greater control or for use as rhythm tracks, load them into a MIDI sequencer app (Mac, PC, iOS, Android, etc.) to loop tracks, change the tempo, or listen to individual parts. The files come arranged for General MIDI percussion and can be remapped to other instruments using the included MIDI maps.

The Eve Orchestra of West Africa

The Eve people of the island town of Anyako off the coast of Southeastern Ghana have developed a music rich in polyrhythmic interplay, such as in the drum music of takada, a dance and drumming club developed by the Eve women. The instruments of their percussion orchestra are detailed in the West African section of Ancient Rhythms – Future Grooves.

The Interlocking Rhythms of Balinese Gamelan

A gamelan is an ensemble normally composed primarily of percussion. In Bali, orchestras of tuned gongs, metallophones, and drums fill the night air with animated music. Musicians play alternate notes to form the melody line. These interlocking parts, known as kotèkan, require cooperation and a keen sense of rhythm to perform. The Balinese section of Ancient Rhythms – Future Grooves details the music and instruments of the Gamelan Semar Pegulingan and other ensembles.

The Rhythmic Cycles of India

The perception of the cyclic nature of life is reflected in Indian classical music through the device of tala, a recurring rhythmic cycle. There are two different traditions in Indian classical music, the Carnatic music of South India and the Hindustani music of North India. The North Indian tabla is a set of two drums with goat-skin heads. For every sound on the drum there is a corresponding syllable known as a bol. Each North Indian tala has a theka, a standard set of bols that identify the rhythmic cycle. The North Indian section of Ancient Rhythms – Future Grooves features a full explanation of the tabla bols complete with audio links and files for VSTi instruments and GarageBand that remap the MIDI files to the included tabla samples. The mridangam is a South Indian two- headed barrel drum. South Indian drumming has a language all of its own known as solkattu. The corresponding syllables for the sounds produced by the mridangam, known as konokol, are detailed in the South Indian section.

Scalloped fretboard guitar pioneer Matthew Montfort has devoted his life to cross-cultural music through his role as the leader of the world music group Ancient Future. He spent years of study with some of the world's best musicians, such as gamelan director K.R.T. Wasitodipuro, North Indian sarod master Ali Akbar Khan, and vina master K.S. Subramanian, with whom he did an intensive study of South Indian note-bending techniques. He has recorded with legendary world music figures ranging from Bolivian panpipe master Gonzalo Vargas to tabla maestros Swapan Chaudhuri and Zakir Hussain, and performed concerts worldwide, from the Festival Internacional de la Guitarra on the golden coast of Spain to the Festival of India in Mumbai. He has taught masterclasses at prestigious universities, schools, camps, museums, and resorts, and has over four decades of teaching experience, including two on the faculty of Blue Bear School of Music in San Francisco. He is recognized as one of the world's 100 Greatest Acoustic Guitarists by DigitalDreamDoor.com, a curated “best of" site, along with such luminaries as Michael Hedges, Leo Kottke, Merle Travis, John Renbourn, Tommy Emmanuel, and Alex De Grassi. He was interviewed in the December 2009 Les Paul issue of Guitar Player Magazine about the scalloped fretboard guitar and the application of the rules of Indian raga to the music of Jimi Hendrix as exemplified by “Purple Raga" from his debut solo recording, Seven Serenades for Scalloped Fretboard Guitar. ﻿

﻿The Workshops and Skype Lessons

“You can view this deceptively slim masterwork from a few different angles: as a friendly yet serious appetizer on three of the most sophisticated rhythm systems on earth; a chance to work on your rhythmic sight reading; a three-culture dip with matching mp3s for your ears; a gateway to exotic spices, complete with MIDI files, for your songwriting or drumming; or a fun way to organically digest complex time signatures. No matter how you slice it, this scholarly labor of love is packed with rich flavors for those patient enough to harvest them." –E.E. Bradman, Bass Player Magazine

“You've heard Afro-Pop, sitar, gamelan and world music for years. But do you know what they are and how they work? Better yet, would you like to play those twisted cross-rhythms and melodies? In Ancient Traditions – Future Possibilities, Matthew Montfort, a founding member of the world music band Ancient Future, has put together the book for people who want to dig into world music with both hands. The first section of the book covers traditional music of West Africa, Bali and India with theories and exercises. Wherever possible, Montfort has provided beat counts alongside the standard musical notation so even if you can't read music, you can still learn the rhythms. The last section of the book mixes patterns from different cultures, demonstrating the powerful music these simple exercises can generate." –Richard Kadrey, San Francisco Chronicle

“A hands-on exploration of Balinese, African, and Indian rhythms that should appeal to all musicians. One needn't play percussion instruments, or any instruments at all, for that matter, to use and benefit from the book." –Drums and Drumming

“A very practical manual. There is enough material to keep interested musicians busy for years. Montfort has done a great service for western musicians interested in world music. A pleasure to work with." –Option

“Very highly recommended for any instrumentalists hoping to expand their rhythmic horizons. If you've never investigated the beautiful clash of African polyrhythm, the incredible interlocking textures of Balinese music, or the complex metric structure of Indian classical music, check out Ancient Traditions—it will blow your mind and deepen your groove." –Guitar Player

“If you're tired of programming your drum machine with the same old 4/4 back-beat, or you want to sharpen your rhythmic chops, this book is highly recommended." –Electronic Musician

“An excellent book for use in percussion technique sessions or other classroom situations. The descriptive material is lucidly written and is aimed at a novice." –Percussive Notes

“Not just a book about world music, but a guide book on how to create it. Sections include styles of Northern and Southern India, West Africa and Balinese gamelan. In the 'Future Possibilities' section, you see how to combine styles into something new, weird and beautiful." –Covert Culture Sourcebook

“Offers a series of enjoyable exercises based on authentic rhythms and mnemonic found in the featured cultures. Appropriate for grade 3+ though adult expert, all can be performed using hands, voice, body or desks, cans, etc. or traditional instruments." –World Music at West MUSIC

Ancient Traditions – Future Possibilities has been used and admired by many teachers and musicians around the world.

Reinhard Flatischler, founder of the TaKeTiNa rhythm training process, was an early enthusiast of the method book.

John Bergamo (1940-2013), composer and coordinator of the percussion department at the California Institute of the Arts, found a copy of Ancient Traditions – Future Possibilities when he cleaned out his desk at retirement. As he finally had the time available, he worked his way through it, after which he called the author to thank him for writing it, and encouraged him to write more world music training manuals. One is in the works.

Steve Smith, stellar jazz and rock drummer of Journey fame, went through the book in preparation for a percussion summit with tabla master Zakir Hussain.

Start your own journey to musical excellence with Ancient Traditions – Future Possibilities!