"What Could Be"- The New Release for the N. Glenn Davis Trio Featuring Mark Soskin and Peter Dominguez 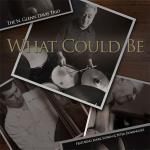 slideshow
Drummer and composer N. Glenn Davis leads this swinging trio of talented veteran jazz musicians for his third release as a leader. This recording continues the classic tradition of the piano trio performing creative music that will appeal to listeners on many levels. Featured here are three new original compositions by N. Glenn Davis and three compositions by stellar NYC pianist Mark Soskin (14 years with Sonny Rollins). Also featured on the CD are three classics tunes, “The Dolphin" by Brazilian composer Luiz Eca, “Blackberry Winter" by Alec Wilder, and “Sometime Ago" by Sergio Mihanovich. Bassist Peter Dominguez rounds out the trio.

N. Glenn Davis is a recording artist, drummer,composer, and educator. Davis's debut CD, The N Glenn Davis Quartet A Different View was released by the Jazzed Media label in 2007 and features ten of his compositions. Davis's 2009 release on Jazzed Media, The N. Glenn Davis Quintet Come Right In, features the legendary Phil Woods on alto sax, Mark Soskin on piano, Dean Johnson on bass, Jack Schantz on trumpet and flugelhorn, and Dave Sterner on alto and soprano saxophones.The quintet performs eight Davis compositions and two jazz classics. Glenn's latest release What Could Be is a piano trio featuring Mark Soskin, Peter Dominguesz and Glenn Davis titled, “What Could Be," on the Speak Jazz label.

Davis grew up in the Cleveland area studying drums with Bob McKee. Among his early influences were fellow Cleveland drummers Skip Hadden, Val Kent, and Jamey Haddad. He attended the Berklee College of Music in Boston, graduating with a Bachelor of Music Degree in 1979. In addition to drums, his studies included arranging, harmony, and percussion studies with Gary Chaffee, Joe Hunt, and Dean Anderson. A highlight of Davis's education was studying with master drummer Alan Dawson who had a strong influence on his musical style. Davis lived and played music in Boston for eleven years cutting his teeth on the vibrant Boston jazz scene of the 70s. Davis performed around the city regularly with notable musicians, Mike Stern, Jeff Richman, Grey Sargent, Tiger Okoshi, Santi Debriano, John Lockwood, Neil Stubanhaus, Cathy Segal, Bill Molenhoff and John Licata among others.

Spending a few years in NYC, Davis had a long term engagement with Rino Minetti, freelanced extensively, and performed with The Benny Salzano Quintet. As a writer, he has had his solo transcriptions of Max Roach and Philly Joe Jones published in The Modern Drummer magazine.

Since returning to the Cleveland area in the late 80s, Davis has kept busy playing on the local scene, teaching music, and raising a family. Davis currently leads his own jazz quartet and quintet. He also freelances with several other groups, including The Joe Hunter Trio, John Morton, and The Dave Sterner Quintet. Davis earned his Masters in Music Education from The University of Akron, and balances teaching music in the Cleveland Schools with performing. Davis states, “I am enjoying writing music and having great musician play and record my compositions."