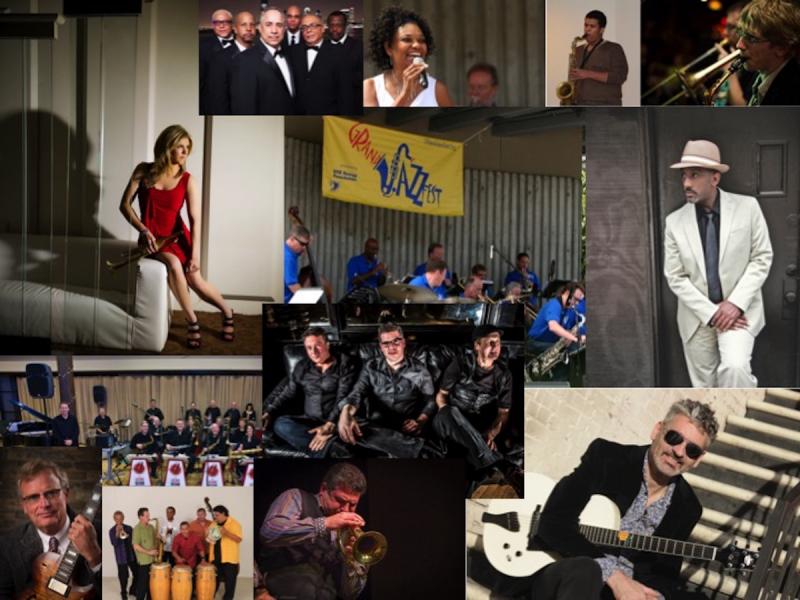 “We’re very excited to have Cindy Bradley headline our fifth annual GRandJazzFest presented by DTE Energy Foundation!” GRandJazzFest Founder Audrey Sundstrom said. “Cindy is our first female headliner at GRandJazzFest. I’ve seen her perform twice, initially at the beginning of her career and again when she was a seasoned performer. She’s an excellent trumpet player and performer who will have everyone moving and dancing!”

The New York City-based Bradley performs Saturday night, Aug. 20. The Sunday-night headliner is Chris Standring, a guitarist from Los Angeles who brings high-energy contemporary jazz to the stage. Throughout the two-day weekend is an eclectic array of jazz performances for all audiences – from big band to straight-ahead, Latin-Cuban and more.

“GRandJazzFest has truly become one of the region’s most important cultural and community events, and DTE Energy Foundation has been a proud sponsor since the beginning,” said Mark Stiers, president and chief operating officer, DTE Gas. “Not only does the festival bring world-class music to West Michigan, it supports the economy in so many ways. Our investment in GRandJazzFest is one of the wonderful ways we show our commitment to the communities where we live and serve.”

The two-day GRandJazzFest festival will again be free thanks to presenting sponsor DTE Energy Foundation, the City of Grand Rapids, Downtown Grand Rapids Inc. (DGRI) and other sponsoring organizations and individuals. The festival recently received Signature Event status from DGRI. People can get a taste of past GRandJazzFests by viewing the “recap” videos here.

Calling her 2009 debut Bloom proved prophetic as Cindy Bradley has blossomed into a powerful and charismatic presence on the contemporary jazz festival circuit. Bradley has performed nearly everywhere, from the River Raisin Jazz Festival in Monroe, Michigan, to the Dubai Jazz Festival. She won Best New Artist at the American Smooth Jazz Awards and was named Debut Artist of the Year by the Catalina Island Jazz Trax Festival and Smooth Jazz News. With the release of Unscripted, her latest Trippin’ N Rhythm recording, Bradley keeps the trumpet and flugelhorn hip and grooving. A native of Buffalo, New York, she loves telling the story of how she became a trumpet player by accident in fourth grade: “I started playing the piano when I was six, but we had to choose a different instrument to be part of the band program. I forgot to bring my permission slip to class, so the teacher just had me randomly circle an instrument that I wanted to play. I picked the trumpet, which turned out to be a life- and career- defining fluke.” By 12, she was performing professionally with Sugar and Jazz, a Buffalo-area jazz band that consisted of promising musicians. After earning a bachelor’s degree in jazz studies from Ithaca College, she went to the New England Conservatory to study for her master’s degree in jazz trumpet performance; at the conservatory, she studied with and was influenced by many jazz greats. After earning her degrees, Bradley immediately headed to New York City and immersed herself in the vibrant jazz scene, discovering equal passions for straight-ahead be-bop and contemporary jazz as well as funk, Top 40, R&B and jazz fusion.

Over 15 years since first dazzling the contemporary jazz world with his breakthrough set Velvet, Chris Standring still revels in his restless creativity – discovering fresh, freewheeling and innovative ways to share his passion for groove, melody and dynamic “guitarisma.” Celebrating the remarkable milestone of album number Ten – an ever-evolving catalog that includes the 2011 re-issue of his 1989 first indie recording Main Course (The Early Tapes) – he’s still got the cool, trippy sonics happening via a colorful fusing of live instrument and DJ sounds. While keeping his melodies, rhythms and arrangements as infectious as ever, the British born, now-L.A.-based hit maker fashions them as the vehicle to unleash his deeper chops as a powerhouse jazz player and improviser.

In keeping with a tradition established with the first GRandJazzFest in 2012, the Grand Rapids Jazz Orchestra with vocalist Edye Evans Hyde opens the 2016 event. For more than 35 years, the Grand Rapids Jazz Orchestra has been one of Michigan’s premier jazz ensembles, featuring some of the finest musicians in the area playing swinging original compositions and arrangements as well as traditional favorites. 2011 West Michigan Jazz Society Musician of the Year Edye Evans Hyde has been singing jazz, blues and pop music for more than 30 years in West Michigan, Los Angeles, Asia and Europe. Over the years, Evans Hyde has shared the stage with world-renowned blues singer Linda Hopkins, pop singer Michael Bolton, vocalist Maria Muldaur, actress Connie Stevens, the late Ray Charles and Cuban trumpet player Arturo Sandoval.

organissimo‘s music leaps over fences and satisfies a diverse range of tastes. The group formed in 2000 with the goal of bringing jazz back to the people. organissimo’s sound is instantly identifiable yet constantly evolving, infusing elements of funk, gospel, blues, progressive rock, and Latin rhythms into a solid foundation of jazz. Shifting meters, deep grooves, melodic finesse and tight ensemble interplay are hallmarks of the organissimo sound. The latest CD, Dedicated, hit No. 5 on the JazzWeek charts and stayed in the Top 10 for eight weeks.

Formed in August 2003 by reedman Paul VornHagen and conguero Alberto Nacif, Tumbao Bravo is an exciting Cuban jazz combo that has released four critically acclaimed CDs. Winner of the 2005, 2007 and 2013 Detroit Music Awards for Best Jazz Recording and Best World Music Band, this combo has performed at all of the major Michigan jazz/music festivals.

Steve Hilger plays contemporary jazz as well as jazz fusion, both original works and works well known throughout. His band has performed jazz, jazz fusion and blues in venues, festivals and concert performances from Chicago to Alpena. Hilger, playing guitar and guitar synth, has been a singer-songwriter since the early 1970s. Joining Hilger will be David DeVos on bass, John Gist on saxophone and electronic wind instrument, Brian Drews on keys, Bill Roelofs on drums, Rob Mulligan on percussion and Deborah Richmond singing vocals. These musicians collectively also perform as the Steve Hilger Band, predominantly performing progressive blues. They have released three albums and have been nominated five times for “Jammie” awards by WYCE.

Since hitting the jazz scene in 1996, Tim Bowman has been winning rave reviews and garnering ubiquitous smooth jazz radio airplay. His debut album, Love, Joy, Peace, peaked at 19 on the Gavin Smooth Jazz Charts and 20 on Radio & Record Magazine’s album chart. In his fourth collection, Bowman surpassed the success of all of his prior albums with his smash No. 1 single Summer Groove. The release of Bowman’s fifth album (2008) increased his momentum; the self-titled release featured hit songs Sweet Sundays (No. 1, Billboard Smooth Jazz Singles Chart), High Def and Rapture. In 2010, Bowman released The Collection, showcasing some of his finest work and highlighting the unique depth of his ability as a talented songwriter. His latest single, Seaside Drive, was another crowning moment for Bowman, reaching No. 1 in the country. More at http://www.timbowman.com/.

The band selected to perform during GRandJazzFest 2016’s Student Showcase is Bierenga-Sullivan Quintet. Led by saxophonist, composer and bandleader Dominic Bierenga, the band offers spirited music to kick off Sunday at GRandJazzFest. A recent graduate of Central Michigan University, Berenga also is a member of Paddlebots (progressive soul-pop), the Four Brothers Quartet and the Kosta G Kapellas Trio. He also leads a big band The Common Denominator.

The Lakeshore Big Band has been entertaining audiences throughout West Michigan for over 25 years, developing into one of the area’s finest concert and dance ensembles. Based in Spring Lake, Michigan, the LBB is a full-size (17 piece) traditional big band. The music the band performs comes from a large library of tunes from the early days of jazz to present day, including great hits from the big-band era by Glenn Miller, Duke Ellington, Count Basie and more, as well as contemporary jazz, ballroom dance and popular music. Urban Jazz Coalition has been one of the hottest live-performance ensembles on the contemporary jazz scene for some time, and 2015 marked the band’s 20th anniversary. Performing a unique and energetic blend of R&B/jazz/fusion, JazzTimes Magazine award-winning columnist Brian Soergel described the sound as “flush with rhythmic grooves, funky bass lines and beautiful melodies.” Three consecutive releases achieved Top 30 status on multiple contemporary jazz charts. The band’s music has been featured on network television programming, international film soundtracks, national advertising campaigns and as part of an eclectic group of artists on a gospel/jazz compilation project released by Capitol/EMI Records.

Walter White—leader of the Walter White Jazz Quartet—has emerged with a personal voice on both trumpet and flugelhorn. His playing is darkly incantatory, furiously intense, risk-laden, harmonically astute, rhythmically free, with roiling passion tempering a sharp intellect. His band plays solid originals and his own exciting arrangements from both standard jazz and classical collections. His newest jazz quartet recording Most Triumphant released in July 2014 on Summit Records and stayed on Jazz Week’s Top 50 charts for more than 10 weeks.

GRandJazzFest presented by DTE Energy Foundation is a community event of the nonprofit 501(c)(3) organization “GR and Jazz” founded in 2012, with the purpose of promoting and bringing awareness of jazz and related arts to new and diverse audiences through educational programs and community events. GRandJazzFest 2016 is a FREE weekend-long event that runs Saturday, Aug. 20, from noon until 10 p.m., and Sunday, Aug. 21, from 1 p.m. to 9 p.m., featuring notable jazz artists, including many who are Michigan-based. GRandJazzFest brings together acclaimed jazz performers as well as highlights emerging artists for diverse audiences. GRandJazzFest is being held at Rosa Parks Circle, a central location in the heart of downtown Grand Rapids, where attendees can enjoy music, support local businesses and visit other Grand Rapids attractions. The festival is FREE.

About the DTE Energy Foundation

The DTE Energy Foundation is the philanthropic arm of DTE Energy, continuing the legacy of community support and involvement of its electric and natural gas utilities, which serve 2.1 million electric customers in Southeast Michigan and 1.2 million natural gas customers across Michigan. In 2015, the DTE Energy Foundation provided $15 million in grant support to nonprofits throughout the company’s service territories. As one of Michigan’s leading corporate citizens, DTE Energy is a force for growth and prosperity in the 450 Michigan communities it serves in a variety of ways, including philanthropy, volunteerism and economic progress. http://www.dteenergy.com/foundation.