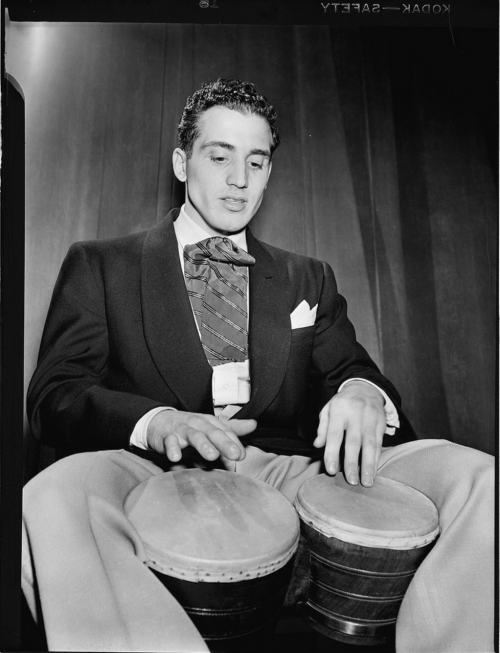 slideshow
Many people have contributed toward the spread of Latin Jazz around the world, pushing the music into the public through a variety of means. Some people have taken a challenging path, sticking steadfastly to their roots, taking their music to the public as a cultural expression. These artists keep the history of the music alive, but often wait many years to find widespread acceptance. Other musicians act as entertainers, connecting with the general public on their level, making Latin music fun and accessible. At times these musicians sacrifice authenticity for commercial success, but they open the doors for countless listeners into a world of deeper musicianship. Both types of musicians are essential pieces of the musical landscape, keeping Latin Jazz alive in their own ways.

Known around the world as “Mr. Bongo," Jack Costanzo brought the instrument and in some instances, the rhythms of Cuba, into the public eyes of pop culture. Born in Chicago on September 24, 1922, Costanzo spent his childhood delving into one of his families popular pastimes, dancing. His skills on the dance floor made him a regular in the ballrooms, where he saw his first Latin dance band performing live, Mario Dumont's band from Puerto Rico. Inspired by the group's percussionist, Costanzo constructed his own bongos and began jamming with the dancehall bands. A stint in the Navy moved Costanzo to the West Coast, where he began his career as a professional percussionist playing with band leader Bobby Ramos. Costanzo soon moved up the chain of success, finding a spot in the Lecuona Cuban Boys, whose hit “The Peanut Vendor" sent them traveling to performances across the country. Costanzo soon became a regular fixture upon the Los Angeles Latin music scene, performing with groups led by Desi Arnez and Rene Touzet. He soon caught the eye of Stan Kenton, whose increased interest in Latin music had inspired him to recruit a bongocero. Important recordings like “The Peanut Vendor," “Bongo Riff," and “Abstraction" introduced Costanzo's bongo virtuosity to the jazz crowd, and brought the integration of jazz harmonies and Afro-Cuban rhythms to a wider population. Kenton utilized the instrument creatively, sometimes leaning upon its Afro-Cuban roots and other times having Costanzo play completely coloristically. Costanzo's gig with Kenton ended in 1948, but he quickly found work with another massively popular jazz figure, vocalist and pianist Nat King Cole. The percussionist worked with Cole for five years, recording memorable pieces such as “Calypso Blues," “Lover Come Back To Me," and “Yes Sir, That's My Baby." After his time with Cole, Costanzo found himself in high demand, earning high profile jobs with vocalist Peggy Lee, Judy Garland, Harry James, and many more. In the mid-fifties, Costanzo formed his own band, utilizing the talents of top Los Angeles musicians like legendary pianist Eddie Cano. Costanzo and his group recorded several albums during the late fifties, including Plays Jazz, Afro, & Latin, Latin Fever, and Mr. Bongo Plays Cha Cha Cha. The exotic appeal of Latin percussion mixed with Costanzo's safe appearance lead to several placements in Hollywood movies, including the Elvis film Harum Scarumand Pat Boone's Bernadine. Costanzo left the scene for quite a few years, only to return with a sizzling new Latin Jazz project, spearheaded by the Bobby Matos produced 2001 album Back From Havana. The following year Costanzo delivered another high energy collection of West Coast Latin Jazz entitled Scorching the Skins. Still residing in Southern California, Costanzo still makes special appearances with his band, continuing to spread the appeal of Latin music to an adoring public.

Costanzo will celebrate his 88th birthday this Friday, September 24, 2010, reaching another milestone in an lifetime of inspirational music performances. While other musicians may have done more to spread authentic mixtures of jazz with South American and Caribbean cultures, Costanzo was one of the individuals responsible for capturing the public's love for Latin music. In honor of this accomplishment, we're dedicating today's Weekly Latin Jazz Video Fix to “Mr. Bongo" Jack Costanzo. The first clip features Costanzo performing a duet with Nat King Cole in the memorable “Calypso Blues." The next two videos are taken from movies featuring Costanzo, including films by Ann Miller and Pat Boone. The last snippet is Costanzo's band Latin Combustion performing a descarga live in 1997. Costanzo's work did a lot to spread Latin music into the greater world, an important task to be respected&#151enjoy!

This story appears courtesy of The Latin Jazz Corner by Chip Boaz.
Copyright © 2021. All rights reserved.