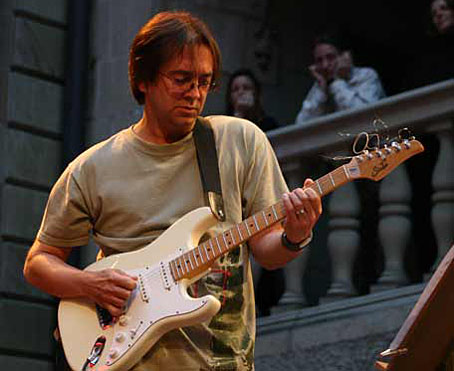 Hot on the heels of their critically acclaimed CD Krantz,Carlock, Lefebvre (Abstract Logix, 2009), these two shows will feature material from that CD as well as music from a collaboration which stretches back to '97.

Wayne Krantz is one of the most exciting and original of guitarists currently on the scene. His effortless blend of styles encompasses rock, funk, jazz and blues,and his affinity with diverse genres and his awesome technique bear favorable comparison to guitar legend Jeff Beck.

Tim Lefbvre is one of the most in-demand bassists on the New York scene, and drumming sensation Keith Carlock was voted Modern Drummer's 2009 Readers' Poll Winner. Together these three virtuosos create music of power, intensity, and above all imagination. It is difficult to think of a tighter or more exciting electric trio.

For the first of the two nights, Krantz, Carlock and Lefebvre will be supported by cellist/singer Trevor Exter. His approach to performing with the cello is unique. Fingertip Music described his music as “seriously unusual and thoroughly, pleasingly accesible" while Urban Folk Magazine praised his “distinct and exceptional vision."

Both nights promise to be memorable occasions.