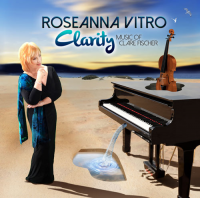 slideshow
The richly harmonic, deeply melodic music of pianist and composer/arranger Clare Fischer (1928-2012) has proven to be fertile terrain for many jazz and pop artists over the last half-century. Vocalist Roseanna Vitro puts her passionate stamp on nine of Fischer’s compositions (and a favorite of his by Ary Barroso) on her gorgeous new CD Clarity: Music of Clare Fischer, which will be released September 30 by Random Act Records. As on her 2011 Grammy-nominated disc, The Music of Randy Newman, Clarity finds Vitro focusing her talents on a pioneering composer of renown.

With their intricate structures and overlapping debts to jazz, Afro-Cuban and Brazilian music, and classical forms, Fischer’s songs are not always easy to sing. “I really didn’t realize what I was getting myself into with this project of difficult melodies,” says Vitro. “But once I was in, well, I was in.” It took almost two years to cultivate lyrics for six Fischer compositions “that have never been sung before. This is the first vocal book by a solo singer of his music.”

On this heartfelt project, Vitro pays tribute to a real musician’s musician whose fascination with bossa nova and jazz samba is brought to vivid life by her longtime working band (and Randy Newman collaborators): pianist/arranger Mark Soskin, the savvy Sonny Rollins veteran and one of jazz’s most in-demand players; brilliant young violinist Sara Caswell, a member of groups led by Esperanza Spalding and Marc O'Connor; bassist Dean Johnson and drummer Tim Horner, rhythm-mates to Vitro and a host of other top vocalists. The prolific percussionist Mino Cinelu (Weather Report) also contributed; vibraphonist Brent Fischer, for whom his father composed “Sleep Sweet Child” (presented here as “Sleep My Child”), guests on one track.

Clare Fischer’s distinguished career began with his work as arranger for the Hi-Lo’s in the late 1950s and included 11 Grammy nominations along with high-profile arranging work for Prince, Chaka Khan, Paul McCartney, Michael Jackson, and other pop stars. His lifelong involvement with Brazilian and Afro-Caribbean music first came to light on 1962’s Bossa Nova Jazz Samba (with Bud Shank) and continued with 1964’s Só Danço Samba and 1981’s Grammy-winning Clare Fischer and Salsa Picante Present 2+2.

The program on Clarity features several of Fischer’s more widely covered compositions, such as “Morning,” “Seagull” (Gaviota), and “Pensativa,” as well as lesser known gems: “Take Your Breath and Sing” (O Canto), originally recorded in Portuguese with a vocal group, and boasting new English lyrics by Roseanna’s husband (and CD producer/engineer) Paul Wickliffe; “Love’s Path” (Love’s Walk), written for Fischer’s wife Donna, with new lyrics by Wickliffe; and “Swingin’ with the Duke” (The Duke), whose lyrics were co-written by Vitro and Cheryl Pyle. The non-Fischer number, “Web of Love” (Inquietação), is by Brazilian master Ary Barroso and dates from 1935; new English lyrics are by Roger Schore.

“My doing Clare’s music is a deliberate effort to expand the jazz repertoire,” says Vitro, whose previous CDs have also spotlighted composers Ray Charles and Bill Evans. “While the American Songbook now includes works by composers from the 1960s forward—Joni Mitchell, Randy Newman, Paul Simon, James Taylor, Jimmy Webb—I felt that Clare was a neglected figure. He’s an insider’s composer, representing a chamber-leaning point of view. I’m hoping that this record will introduce him and his songs to a wider audience, and that my fellow jazz singers hear this material as worthy of modern interpretation.”

To illustrate this point, Vitro asked her daughter, Sarah Wickliffe (a painter and film animator for ABC’s The Chew), to create a visual depicting Fischer’s “undiscovered” music as the desert. In Wickliffe’s startling cover art, inspired by a Salvador Dali painting, the water flowing from the piano and violin “illustrates the birth and beauty of new music flowing into a bottomless well of creativity,” explains Vitro. “My image is smiling, gazing at our new creation of stories set to intriguing melodies. Clare Fischer’s harmonic colors and resplendent melodies are rhythmic chamber music for the voice, waiting to be discovered.”

A native of Hot Springs, Arkansas who emerged on the music scene in Houston before relocating to New York in 1978, Roseanna Vitro has made her mark as an educator in addition to her accomplishments as a recording artist and bandleader. For the last 14 years she has been the Vocal Chair at New Jersey-City University. Until last year she was the vocal jazz teacher at NJPAC, the New Jersey Performing Arts Center’s Wells Fargo Jazz for Teens Program in Newark. She founded and runs JVOICE, a Facebook page for singers (with over 2800 members) where she posts videos, workshops, school info, and interviews with dozens of “great teachers, performers, gatekeepers, and pianists—it’s all about the singers.” These interviews led to an affiliation with JazzTimes magazine for whose web site she hosts a column, Voices in Jazz, featuring interviews with artists such as Tony Bennett, Bob Dorough, and Mark Murphy. Her piece on scat singing, “How to Doo Bah—A Guide to Scat Singing,” appears in the September issue.

She will also be giving master classes while in Houston: 11/21 at the High School of Performing and Visual Arts (with Soskin), and 11/23 at Jane Vandiver’s Star Singers Studio.