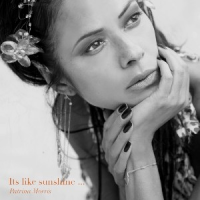 Patrina Morris was born in India to Anglo-Indian parents and moved to England when she was just six months old.

She was brought up in North London and lived there until as a teenager she was spotted by a model agent while working in a restaurant to pay for Art School.

Soon she was living in Paris, Milan, Tokyo and New York and making her way in the world of fashion working for some of the most prestigious clients and appearing in Italian and German editions of Vogue, Elle and Marie Claire.

Music was always her first love and after a few years she decided to make a change and began working in the music industry as a singer, songwriter and co-writer. Her projects were varied. She worked with Matt Bianco and Aswad and early on she was fortunate enough to work with well known talents such as: Paul Oakenfold, Talvin Singh (Massive Attack, Björk), Andrew Hale (Sade), Rob Davis (Kylie Minogue, Sophie Ellis-Bextor) Jon Klein (Siouxsie and the Banshees, Sinead O’Connor) and Paul “Groucho” Smykle (David Bowie, Bob Marley, Grace Jones).

It wasn’t until later when she moved to Portugal and learned to play guitar that she found her voice and created the sound she is becoming known for today.

Her debut EP entitled Stories I Never Told You was released in the summer of 2008 and was an easy introduction to her sultry sound, which is reminiscent of the early beach samba sound of Brazil in the '70s combined with singer/songwriter inflections… she prefers to call it a “hybrid” of all she loves.

Soon after the release, Patrina signed a deal with EMI/Universal Japan to make her first album Lies Fall Away including the cover- version of “Carnival” (The Cardigans), which went straight to No. 3 in the Japan-Single-Charts, followed by independent releases with Red Digital (Sony NYC) EP 1 Stories I Never Told You, EP 2 Lies Fall Away, EP 3 Even in the End and EP 4 Sad is… The home sessions.

In the interim three singles were released entitled “Breaking All The Rules”, “Tempted” featuring Brian Jackson and “Now I Know” alongside two dance remixes by Ibiza DJ Savalas.

The summer of 2021 saw the release of EP5 “Sweet As Ever” a collection of intemporal Bossa Nova based love songs and of course the new single “It’s Like Sunshine”, a collaboration with Jon Klein (London) and Don Switzer (NYC).

Patrina has also been working on a couple of film and TV projects in the USA, as well as working as a lyricist on other genres of music.