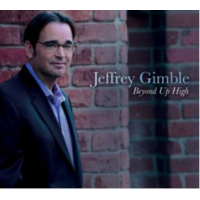 slideshow
"Beyond Up High," Jeffrey Gimble's Debut CD, arranged by Tamir Hendelman and produced by Mark Winkler, to be released April 15, 2013 on Cafe Pacific Records.

Jeffrey Gimble’s “Beyond Up High" displays all the appealing qualities of an unusually intriguing new album, certain to be around for more than a little while. Just listen to the ten far-ranging songs on “Beyond Up High." This broad selection of material, chosen by Jeffrey, producer Mark Winkler and pianist/arranger Tamir Hendelman, cover a lot of styles with tunes that bear fresh attention.

“Mark, Tamir and I worked very hard to pick these songs — I wanted to offer the listener an interesting ride, hoping that each song would feel like its own unique experience.”

As Don Heckman says in his liner notes, “The result is the introduction of a fascinating new jazz talent, one who moves easily and convincingly from enthusiastic scatting to rich balladry. Listen as well to the easygoing sense of swing and convincing blend of interpretive storytelling.”

Included in this CD are great standards like “Sweet and Lovely, “It Only Happens When I Dance With You” and “All the Things You Are.”

“I wanted to do something special with ‘All the Things You Are’ – not turn it upside down but do something different, so we added a melodic passage inspired by Miles Davis and I wrote some lyrics for it.”

There’s also Oscar Brown Jr.’s “Hum Drum Blues” (done in 7/4 time) and Bill Withers’ “Ain’t No Sunshine,” as well as a fascinating group of songs with their own unique characteristics: Antonio Carlos Jobim’s “Agua de Beber,” the Bergmans’ “Windmills of Your Mind,” “Rainy Days” (arranged as a wistful jazz waltz by pianist/arranger Rich Eames), a quietly joyous swing arrangement of Irving Berlin’s “It Only Happens When I Dance With You,” Chick Corea’s “High Wire,” and finally Jeffrey’s own intriguingly light-hearted “Creatures,” co-written with Winkler.

This is a colorful, eclectic collection of songs that’s unified and vividly expressed through the language of jazz.

Raised in Texas blues country, in a house full of music, the son of Houston saxophonist and bandleader, Maynard Gimble, Jeffrey began to reveal his budding talent at the age of four. But, despite his early connection with jazz – frequently going to gigs with his father — it was the musical theatre that dominated the early part of his long career. His resume as an actor includes performances in stage shows such as Hair, Forbidden Broadway and The Tempest, as well as the cult film, Crimson Force.

“Despite my passion for theatre, I’d listen to jazz when I wanted to listen to a vocalist focus with purity on the expression of both the lyrics and the music of the song that they were singing. I wondered how jazz vocalists did what they did. I wondered if I could ever sing with such seeming simplicity and such freedom.”

Jeffrey moved from New York to L.A. and became involved in the jazz scene. He jokes that he's probably “the only professional actor who ever moved to Los Angeles and promptly stopped acting and started singing instead.” He took Mark Winkler’s lyric-writing workshop and studied with Tamir Hendelman, who states, “Jeffrey Gimble’s warm rich voice, his knack for reinventing standards and his love for Brazilian music makes his music a treat for the ear.” It was Tamir who strongly encouraged Jeffrey to make this CD.

“I think that my instinct for jazz singing is mostly in my blood and stems from the fact that my father had his own big band.” This debut CD amply demonstrates Jeffrey’s jazz lineage and introduces us to a singer with broad view of the jazz idiom.