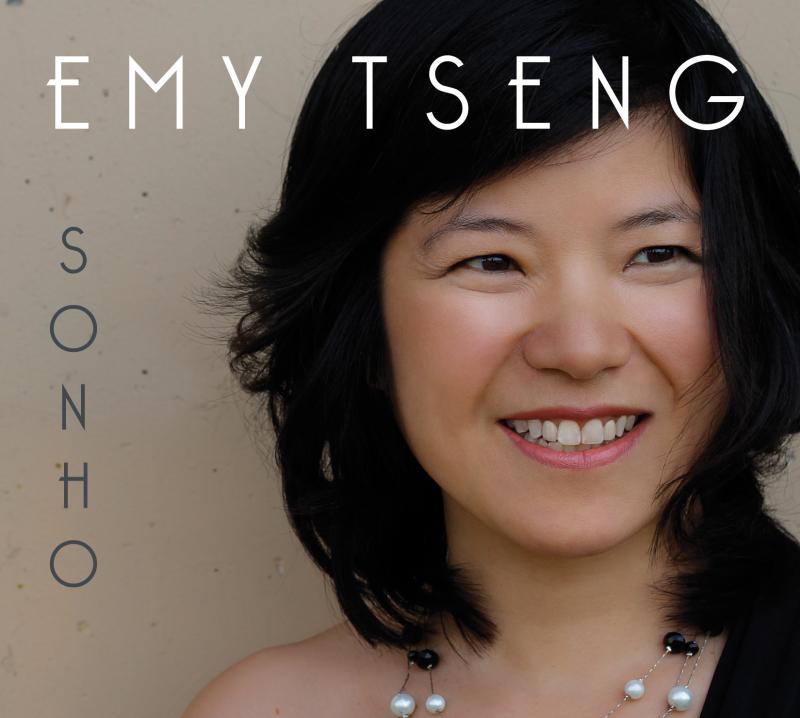 slideshow
The release of Emy Tseng’s debut recording Sonho is a happy event for fans of modern Brazilian jazz. Emy has a memorable and haunting voice along with a real feeling for the music, and her interpretations sound authentic. Utilizing some of the best musicians in the Washington D.C. area, Emy not only does justice to the music she loves but she invigorates the style.

Emy Tseng was born in Taipei, Taiwan, moving to the United States with her family when she was still a baby. Living in the Midwest, she began classical piano lessons when she was four, continuing with them while growing up in Seattle. “My first piano teacher in Seattle took me to a lot of concerts,” she remembers, “and I grew up playing Bach and learning those harmonies. I started singing in choirs in high school, and focused more on singing than piano when I attended Brown University.”

Emy graduated from Brown with a degree in Math and Physics. Then while attending graduate school at MIT, she studied classical voice including early music and French and German art song repertoire at the nearby Longy School of Music. “It was not until I moved to New York in 2001 that I became very interested in jazz and Brazilian music. I lived within walking distance of the Village Vanguard and other clubs. When I heard live jazz, I fell in love with it and then Brazilian jazz and bossa nova, particularly when I heard Brazilian singers such as Paula Morelenbaum and Luciana Souza. Other influences include Kate McGarry and Claudia Acuña.” During her three years in New York, Emy studied jazz improvisation with Jay Clayton. Her next stop was San Francisco (2004-09), where she attended Jazz Camp West and Brazil Camp, as well as studying with Sandy Cressman and Marco Silva at the Jazzschool in Berkeley. “Marco taught me how to sing Brazilian jazz.“ It wasn’t long before Emy was performing at local venues.

Emy moved to Washington DC in 2009 to work on a national program to help low income and underserved communities get online. “I was pleasantly surprised to discover that there is a very active Brazilian jazz community in DC. They took me under their wings and encouraged me to perform and record. I gig often in DC, gaining a lot of experience singing in public and learning on the bandstand.”

The CD opens with “Aquelas Coisas Todas” which at first has Emy’s wordless vocal sounding a bit like a trombone. Wilentz’s fluent and swinging keyboards are well featured. “Deixa” and “Coraçāo Vagabundo” have Emy joyfully interacting with Connell’s clarinet while “Berimbau” and the delightful “Brigas Nunca Mais” feature Emy’s voice sharing the spotlight with Connell’s soprano sax. “California Dreamin’,” a duet with Sigalov’s acoustic guitar, is taken at a slow ballad tempo and finds Emy fully embracing the melody, giving the wistful song a feeling of homesickness. Freddie Hubbard’s classic “Little Sunflower” (which in Latin is “Helianthella”) is given a particularly haunting rendition. Of the other selections, “Se Dependesse de Mim” is thoughtful and melancholy, “Na Beira Do Rio” is a hypnotic bossa, “I Thought About You” gives Emy the opportunity to sing some straight ahead jazz, and the closing “Close Your Eyes” is a duet with bassist David Jernigan that perfectly wraps up the set.

“I feel that the album really reflects my musical voice. It is our modern take on Brazilian music,” says Emy. She is enthusiastic about the future. “I want to spend more time in Brazil, absorbing the music. So much of Brazilian music has the happy interwoven with the sad, with longing and wistfulness. I love performing this music, and take it seriously while having fun with it. Exploring these rhythms and harmonies is a lifelong journey.”