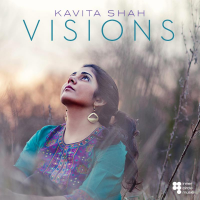 A vivid self-portrait in mosaic form, Shah's Visions (available May 27 on Greg Osby's Inner Circle Music) heralds the arrival of a strikingly original, globally minded new voice. The gifted vocalist/composer brings together a rich variety of musical, cultural, and personal influences into a formidable debut album that combines a jazz quintet with Indian tablas and the West African kora.

Visions interweaves Shah's multicultural background (she's a native New Yorker of Indian descent fluent in Spanish, Portuguese, and French) with her wide-ranging musical tastes (reared on 90s hip-hop, Afro-Cuban music, and bossa nova, she studied jazz voice and classical piano) and her fascination with ethnomusicology (which she studied at Harvard).

“I haven't been so excited about a project like this in a long time." states Loueke. “Kavita is a real, true musician. She's a great singer, but the way she writes music, she's not really thinking just about the voice. It sounds like she could be a horn player, a saxophonist."

The album follows an engaging narrative sweep, tracing the cycle of a day or, from a more melancholy angle, stages of grief (Shah's father died when she was 18). But through Shah's restless searching, it possesses a geographic as well as emotional sweep, made cohesive by her singular, prodigiously confident vision.

“I see myself as a cultural interlocutor," reflects Shah. “A singer can play an almost mystical role, connecting these different elements on stage with an audience through the human voice, through words. With the Visions project, it's amazing to see the Joni Mitchell fan who has never before seen a kora standing next to the hardcore jazz fan who would not expect to hear tablas on a Wayne Shorter tune. I hope that people find something familiar in the music that draws them in, but then discover something new that might change, even for a second, how they see the world."