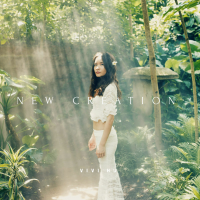 Once upon a time, a young girl was born in Xiamen, China, where she grew up studying traditional Chinese music, along with vocals and flute. After her first exposure to jazz at a festival in Shanghai, she ambitiously determined to infuse jazz into traditional Chinese music. This determination led her to study in New York City, where she earned a master’s in music with a focus in jazz performance for voice, formed her own fusion band, and released her recorded debut.

Don’t tell Vivi Hu that fairy tales never come true, because this is her story.

Vivi Hu first discovered her love of gospel music singing in a choir and realized that music was her calling. New Creation, Hu’s collection of original gospel hymns and praise released in February 2018, is her latest chapter. “As long as I can express myself in music, and to resonate with others, I think this is success,” Hu explained in a 2018 SinoVision interview. “I think my music will be a success if it can comfort others.”

New Creation is Hu’s first recorded venture in her ambitious goal of harmonizing form and content across/between Western and Eastern musical cultures. Her compositions for New Creation render gospel spirit in jazz, sung in a vocal style that sounds both innocent and expert.

“Genesis” adopts the twin tales of creation and of why/how woman was made so that man and woman could both be complete, with mellow yet crisp electric guitar and Hu’s voice flowing through its bright and supple groove. “Light” is more of a prayer than a tale, its acoustic piano and seductive electric guitar suggesting classic Sade rhythms and instrumentation, equal parts love song and hymn.

“Rest in You” seems like musical worship, another prayer in both form and content, adorned in the twin crowns of acoustic piano and electric guitar. The title track comes just as direct, with intimately personal lyrics sharing how the power of love showed Hu the truth. The bonus track provides an alternate version of “New Creation” sung in Chinese lyrics.

Growing up, Hu’s love for jazz and her improvisational acumen made her one of the youngest in-demand jazz musicians in Ziamen and led to performances at such high-profile venues as Gulangyu Music Hall and Le Meridien in Xiamen, the Taihu Midi Festival in Suzhou, and the Summer Music Festival in Shanghai. In every venue, Hu worked to integrate gospel into each performance.

Earning her masters in music at Queens College in New York both relocated and reenergized Hu’s dream. In New York, she began her morning ritual of starting each day with a medicinal dose of gospel music. She formed, then stepped into the lead role as singer for, Vivi’s Bubble Dream, an East-West fusion band which explores jazz, R&B, folk and gospel. “I have awesome musicians in my band. Each of them is the first person I wanted for each instrument: Quincy Newell on piano, keyboard and background vocal, Anna Whitaker on background vocal, Rafal Sarnecki on guitar, David Moxey on bass, Conor Hall on drums and percussion,” she explained in another 2018 interview.

Hu also performed at the 2017 Lunar New Year Celebration at Queens Library, the City University of New York Gospel Festival in New York City, and served as producer for the remarkable event Shanghai Memories: Golden Songs from the 1930s and 1940s at Flushing Town Hall in 2017, providing jazz arrangements and English translated lyrics to the Ba Ban Chinese Music Society’s program of traditional music from Shanghai.

Upon the release of New Creation, Vivi Hu will turn her recording attention to a project that will fuse Hokkien (a dialect from Fujian Province in Southeastern China) folk music with fusion jazz. “I don’t think earning millions of dollars by creating music is the only standard of success,” Hu explained in that same SinoVision interview. “I think music is a pure thing to communicate with people.”