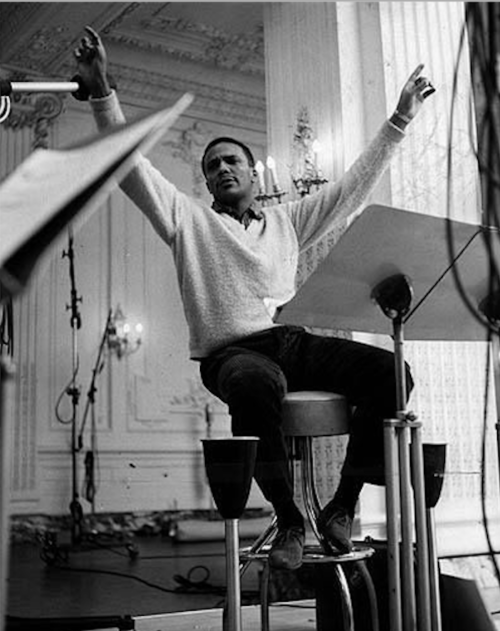 slideshow
Quincy Jones had a sterling jazz career in the 1950s arranging and conducting for top jazz recording artists. He also recorded with his own band. By 1959, Jones decided to invest in a touring production of Harold Arlen's jazz musical Free and Easy that used his arrangements for 18 musicians instead of a full orchestra. Free and Easy premiered in Amsterdam on December 7, 1959 and continued pre-opening performances in Brussels, Amsterdam again and Sweden in late 1959 and early 1960. On January 15, 1960, the musical had its official premiere in Paris at the Alhambra Theatre to rave reviews. But attendance didn't last and the production folded in February.

Feeling enormous guilt over miscalculating and stranding so many American players abroad, Jones formed his own big band with the musicians. In Paris, the band originally was featured on French TV in two separate programs. Late last year, Trent Bryson-Dean untied the two halves into one. Here's the Quincy Jones Big Band in Paris shortly after Free and Easy folded and Jones repurposed the group as a concert band.

Talk about a comeback. In 1961, Jones became vice president of Mercury Records, arranged and conducted for Frank Sinatra on two albums and became a prolific movie soundtrack composer and arranger before shifting to soul-pop.