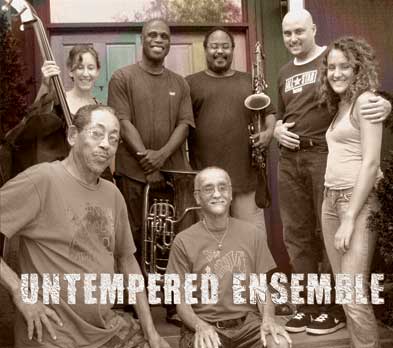 slideshow
Bill Cole, a multicultural multi-instrumentalist, is one of the guys at the top of the hierarchy in the improvised music scene, having been at it in earnest since at least the late 70s. Earlier this year I marveled at his mastery of Eastern reed instruments in his one-on-one with violinist Billy Bang, in what proved to be Bang's swan song. He quickly followed that up with another live performance, this one being the seventh album of his long-running Untempered Ensemble project. This one, with no actual title, documents a live performance of three Cole songs at the Vision Festival in 2009. The current lineup consisting of Cole, fellow original member Warren Smith (percussion, glockenspiel), Joe Daley (euphonium, tuba), son Atticus Cole (hand drums, percussion), Shayna Dulberger (acoustic bass) and Ras Moshe (tenor sax) was supplemented by Cole's daughter Althea SullyCole when the festival organizer asked for a vocalist to be included in their performance.

In my view, adding a vocalist to avant-garde jazz is a tricky proposition; it's often hard to match the voice to the root and blend in naturally with the instruments. But I found no such problems with Althea; she knew just when to come in at the right spots and her vocal style was right for the music. It was also easy to find that elusive root thanks to the tremendous job by Dulberger, who plays the bass with precision and clear tone worthy of her esteemed predecessor in the group, William Parker.

Dulberger's crucial work frees everyone else up, and the unusual timbres created be these odd collection of instruments forms the basis of the Untempered Ensemble's unique sonic print. This music isn't necessarily whack jazz because there is dissonance everywhere—there isn't—it's progressive because of these exotic mixture of sounds ("A Man Of Outstanding Quality Is Preeminent Among His Comrades" has a very well defined repeating figure). It even swings, as on “Poverty Is The Father Of Fear." Smith and Atticus form a formidable percussion team, combining for rhythms that's loose and rooted in African forms, and take its rightful position alongside and not behind the horn players.

Well recorded and mastered by Chuck Eller, this performance by the Untempered Ensemble at the Vision Festival continues a tradition started nearly twenty years ago by Cole, putting together performers both young and old, established and up-and-coming, to forge music representing Bill Cole's singular vision of Eastern and African enhanced jazz.